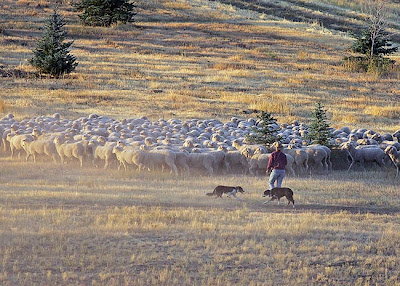 Soldier Hollow: set-out crew person Amy Coapman takes the sheep up to the put out pen at dawn. All photos by Denise Wall, used with permission. Click on the photos for a larger view.
Soldier Hollow, one of the top sheepdog trials in North America, begins on Friday. It's an invitational: competitors include some of the best handlers and their dogs from around the world, as well as winners of important trials in the States. Preliminary runs take place Friday, Saturday and Sunday, and on Monday [Labor Day, appropriately enough] the top fifteen dogs compete in the double lift final. The judge this year is Jack Knox. Working set out, as always, will be my trainer Anna Guthrie and the usual collection of notables ;~) 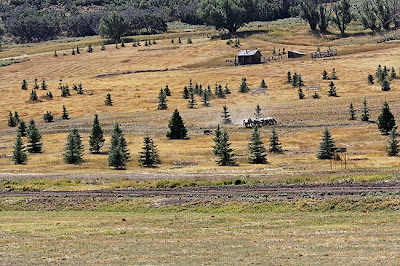 Soldier Hollow: Amanda Milliken's Ethel on the drive.
You might be able to get an idea of the size of the course from the photo above. Set out is to the left of the little cabin, and the sheep awaiting their runs are in the shade of the big tree at the top of the photo.

For those lucky enough to be in Utah with nothing else planned over the Labor Day weekend, directions to the trial can be found here.

Running second on Friday is Price, with handler Amelia Smith. Price set a record with his preliminary score in 2005. He's a Rhys son: someone told me at the Rimrock Ranch trial in May that five Rhys offspring and five Rhys grandpups were running in the Rimrock trial. Blood will tell. 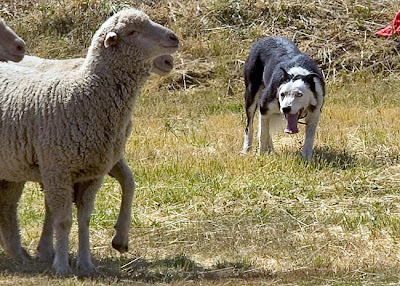 The Welsh National, which was postponed due to the UK's foot and mouth outbreak, will be held September 3 - 5. You might want to keep an eye on YouTube for videos filmed at these trials --- it was very nice to find Mike Cooke's videos from the English Nationals.

Any thoughts on Meeker this year? I might drive up on Saturday for my first time, and hopefully my trainer will advance that far so I can see her in action (along with the monkey cowboys).

Hmmm... Tommy Wilson with Sly. Bev Lambert with Bill and Pippa. Bunch of terrific handlers from Texas. Lots of dogs and handlers I'd love to see.

I'm rooting for my fave Rye and handler Elizabeth Baker. Rye is a real power dog and I love him tons. He's a son of Stuart Davidson's ##Craig and a sibling or half sibling to some of the finest dogs you'll see on a trials field: Bev Lambert's Pippa, Amanda Milliken's Bart and Ethel... Rye made the double lift finals at Meeker as a three year old, and Elizabeth is [clearly] a terrific handler. I'd love to see them win.