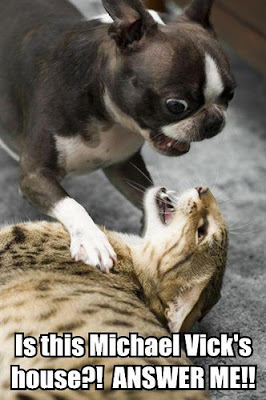 [Photo swiped from one of the chuckleheads geniuses at Fark.com.]
I'm still trying to get my sheep together track down my new Cheviots. They've gone to the Ventura County Fair. Photos eventually ;~)

*************
Excellent article in the Minneapolis-St. Paul Star Tribune on Minnesota's 40% increase in dog bites reported since 1998. [NOTE: Registration required, but you can log in with an easy Quick Pass -- year of birth/zip code. The article is certainly worth the few seconds of trouble.] And here's a link to the study mentioned in the article: Hospital-Treated Dog Bites in Minnesota, 1998-2005. Like many pit bull owners, I'm a dog-bite stat wonk, and I can't get enough of studies like this. Ooh, a pie chart! Excerpts:

[O]ne crucial aspect of a state health report released Thursday that found hospitals and emergency rooms saw a 40 percent reported increase in victims of dog bites in the state between 1998 and 2005: Overwhelmingly, the victim knows the dog behind the bite.

Also indicative of the incidents, according to the first-of-its-kind report: Victims were 4 years old or younger and more likely to be bitten while in the home or the yard.

The study, based on hospital discharge data and medical records from the Minnesota Hospital Association, found that about 3,600 people were treated in the emergency room in 2005, compared to about 2,600 in 1998. The number of those hospitalized saw a smaller increase, from 89 in 1998 to 95 in 2005.

No dog breeds were identified in the report, [Dr. Heather Day, an epidemiologist and a co-author of the study] said, because most hospitals don't specify breed. Also, Day said, pointing to specific breeds may detract from the point that "any dog breed is capable of biting."

“Officials from our organization have examined some of these dogs and, generally speaking, they are some of the most aggressively trained pit bulls in the country,” Wayne ['I don't want to see another dog or cat born'] Pacelle, the president and chief executive of the Humane Society of the United States, said in a telephone interview Tuesday. "Hundreds of thousands of less-violent pit bulls, who are better candidates to be rehabilitated, are being put down. The fate of these dogs will be up to the government, but we have recommended to them, and believe, they will be eventually put down.”

Please, somebody, call BAD RAP and arrange for some real experts to evaluate these dogs. None may be salvageable, but they deserve better than an HSUS "examination."

And yes, that's the same Wayne Pacelle who wrote on his blog, "[Y]ou can help us care for these animals with a special donation." An HSUS spokesperson has stated that the organization gave "several thousand dollars" to shelters caring for the Vick dogs.

Most heartbreaking --- and knowledgeable --- quote from the article:

On Tuesday, the dogs were yelping from within the pound while [Surry County ACO James] Smith sat in his truck with a shotgun next to him. He said he did not know what would become of the animals. “They are in good shape,” he said. “They are not violent to humans.”

*************
From the Washington Post: The Rap on Pit Bulls Revisited - Odds Improving for the Good Ones at Area Shelters

Loudoun isn't the only jurisdiction that has singled out the pit bull as the bete noire of its animal adoption facility. But a wave of new policies and proposals is sweeping the Washington region as shelters acknowledge a fact of life that many jurisdictions have long ignored: Not all pit bulls are dangerous.

And finally, from the "Mark my words, Ontario will be safer" Dept:

The boxer then turned to a second officer who had arrived on the scene, biting him in the groin. The second officer shot the dog, but again, the bullet didn't stop the boxer. Instead, the animal became "frenzied" and officers had to fire several more shots before they were able to kill the animal.

I think dogs that have been confiscated due to having been bred and trained to fight in unlawful dogfighting operations and which are consequently deemed to be unsuitable for candidacy for adoption as pets or companion animals or working dogs should be remanded to the care custody and control of the United States Marine Corps instead of being put down.