Vick dogs "likely to be euthanized" 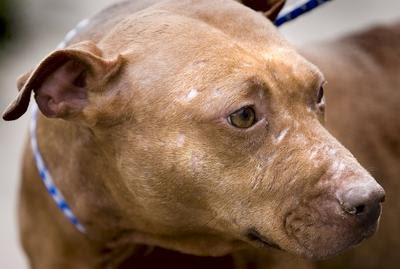 Time is running out for the dogs seized from Michael Vick's [alleged] dogfighting operation.

From the Charlotte Observer:

The federal government is preparing to dispose of most of the dogs seized from Michael Vick's Surry County property during its investigation into a dog fighting operation.

The fate of the 53 pit bulls will rest with a federal judge. Animal rights groups have suggested that the dogs be euthanized because they have been trained to be fighters, not pets.

The U.S. attorney's office published notices last month giving anyone until Thursday to claim ownership of one or more of the dogs. Following federal law, the government in early July filed a civil action in court seizing the animals.

If no one steps forward to claim ownership, the case will move to a federal judge who has two options: sell the dogs or dispose of them "by other humane means." Other humane means usually results in killing the dogs, animal rights experts say.

"If there is a professional dog fighting operation, we typically recommend euthanasia of the animals," said Wayne Pacelle, president of the Humane Society of the United States, an animal rights group [...]

"In most cases, pit bulls seized from dogfighting rings are euthanized, and as sad as that is to all of us, it may be the best thing to do for everyone concerned," PETA spokesman Dan Shannon said.

Victims of cruelty, and now, it seems, victims of ignorance. Those poor dogs.
Posted by Luisa at 7:43 AM