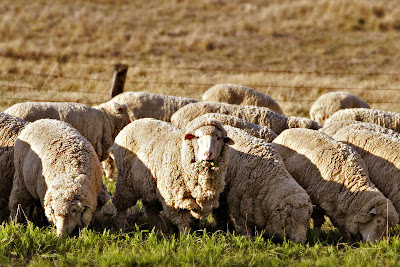 Earlier this month I posted a link to the NY Times article Food that Travels Well:

[L]amb raised on New Zealand’s clover-choked pastures and shipped 11,000 miles by boat to Britain produced 1,520 pounds of carbon dioxide emissions per ton while British lamb produced 6,280 pounds of carbon dioxide per ton, in part because poorer British pastures force farmers to use feed. In other words, it is four times more energy-efficient for Londoners to buy lamb imported from the other side of the world than to buy it from a producer in their backyard. Similar figures were found for dairy products and fruit.

Bill Fosher of the Sheep Production Forum posted a comment: "I'd want to run that claim about Britain's poor pastures through the BS detector."

Michael H. Shuman, the author of The Small-Mart Revolution: How Local Businesses Are Beating the Global Competition, called BS as well:

Congratulations to the New Zealand lamb-export industry for getting a gullible New York Times to publish an op-ed recycling its claim that its product is better for the global environment than locally produced lamb [...]

The Saunders’ study is a nice promo for the New Zealand lamb industry, but it’s a lousy piece of analysis. It’s an embarrassment that the New York Times so sheepishly republished this disinformation about local food systems. Real localization means avoiding environmentally unsound inputs of outside fertilizer, feed, and additives. It means pruning away the vast economic waste associated with ad agencies and middle people. It means avoiding trucking food around either nationally or internationally. Account for these items comprehensively and fairly, and local food wins out environmentally over global food almost every time.

Also on The Ethicurean: The barriers to buying local meat --- and not only in Wyoming. An old-ish article [July 1] but interesting:

In a healthy local-food economy, Sundance ranchers would be able to bring their animals to C&A Meats, which would in turn sell the processed meat to a local retailer. Local consumers could eat locally produced and processed meat, and the revenues would stay in the community. But the system that exists now in Sundance, as in much of rural America, requires producers who want to sell their meat in local retail outlets to ship the live animals either to state-inspected facilities far away or to neighboring states for processing. The transport costs, not to mention the negative effects on animal welfare, can be enormous. That’s a Rube Goldberg system if I’ve ever seen one — and it makes it extremely difficult to procure local meat locally unless you can seek out a rancher and can accommodate at least half a cow in your freezer.

Tana Butler, who has one of the best gigs on the planet -- she photographs farmers, farms, farm dinners, and farmers markets -- is all over the American Lamb Board like a bad smell:

[M]y suspicions are based on, well, everything else we know about producing meat in mass quantities, and how hard that is to do cleanly, humanely, and sustainably.

I can only dream of the day advertising and agribusiness interests try to corrupt my blog.

Chef Rebecca King of Ardi Gasna has a new organic grain supplier: the local microbrewery. Barrels of [wet] grain --- and it's free:

I would like to encourage anyone in the area to come by and check out your local microbrewery or order their beers at your favorite local eatery. My favorite is the brown ale but the sheep prefer the lighter brews like the pale. The more beer you drink the more grain for my sheep--I really think it has added a nice earthy nuttiness to the milk!

That would be the Santa Cruz Mountain Brewery, folks. Cheers!

ETA: Check out Of Church and Steak: Farming for the Soul in Wednesday's NY Times --- it's about the "deep and growing involvement of the faith community" in agricultural and environmental issues.
Posted by Luisa at 11:26 PM

Email ThisBlogThis!Share to TwitterShare to FacebookShare to Pinterest
Labels: sheep