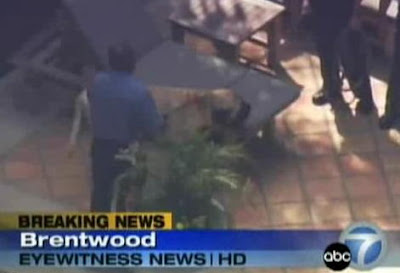 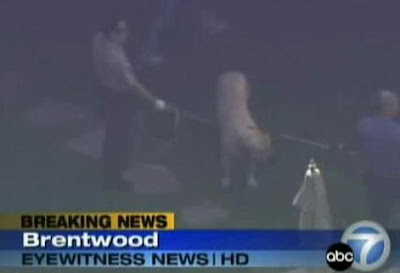 Biggest dog story of the day, and no, that was not an effort to crack wise: at least two, and possibly four "200 lb mastiffs" mauled a man to death this morning at the Brentwood home of actor Ving Rhames, whose name I now know how to pronounce. Google News is up to 240 related stories so far. According to news reports the victim was able to run away and close a gate between himself and the dogs, then collapsed and died. TMZ is there, with a video --- yep, looks like a mastiff to me. A composed, tail-waggin' mastiff, wondering what on earth is going on.
Every so often you'll hear the phrase "bred to kill" when people are pit bull-bashing, and I'll be interested to see if the phrase turns up in coverage of this recent tragedy.
Lucas County [Ohio] Dog Warden Tom Skeldon was all about "bred to kill" in his testimony to the Ohio Supreme Court, and damned if most of the justices didn't swallow it in the face of overwhelming proof to the contrary, and vote this week to allow breed-specific legislation targeting pit bulls.

"They're bred to kill," Skeldon said. "That doesn't mean they're all going to do that."

Boundless, staggering ignorance alert: for crying out loud, Tom, could you please remember that you are talking about millions of dogs?

Yes, you're talking about the pit bull/cane corso mixes owned by Toledo drug dealers, and I'm sorry as hell you have to deal with them.

But your ginormous sweeping generalization also includes a bunch of happy little Staffordshire bull terriers --- 918 registered by the AKC in 2006; lots of UKC champion American Pit Bull Terriers competing every weekend in shows and obedience trials; thousands of AKC-registered American Staffordshire terriers; the hippo-sized "rare blue" pit bulls, owned and spoiled by dog-loving rap stars and their fans; the medium-sized 'bulldawgs" prized by Texas hog-hunters; the skinny, heartbreakingly friendly gamebred dogs taken from their abusive owner in Florida; and the ten year old shelter adoptee that sleeps on my bed each night, so friendly and trusting she'd let the ax-murderer in if only she could reach the doorknob.
"Bred to kill"?
Please. These dogs and millions like them were bred for color, bred for [every] size, bred for show, bred for money, bred to hunt hogs, bred to be pets: and for the better part of the past hundred years, that's all they've been bred for.
A very small fraction of the nation's 4 million or so pit bulls are bred for the purpose of fighting other dogs. Not people --- other dogs. And dogfighting is terrible, but some hounds and terriers are still bred to kill everything from mountain lions to woodchucks, and people have the brains to understand that doesn't mean your kid is next.
A much smaller fraction of the nation's 4 million or so pit bulls are purposely bred to be aggressive towards humans, sometimes by crossing a pit bull with a guardian breed like the cane corso. And irresponsible breeding sometimes produces dogs with poor temperaments that may bite, but that doesn't mean they were bred for the purpose. Pit bulls without the breed's traditional, people-friendly temperament shouldn't be bred: they should be euthanized. But they make up a small minority of the nation's millions of pit bulls.
And what about the mastiffs that killed that poor man in L.A. -- were they "bred to kill"? Mastiffs and bullmastiffs actually were bred to be manstoppers, back in the day. Way back in the day. In England they were bred to patrol estates and take down poachers. But that was nearly two hundred years and countless dog generations ago, and for well over a century they have been bred to be nothing but pets and show dogs.
We will probably never know why these mastiffs attacked, but I promise you it wasn't because they were "bred to kill."
Remember those five factors mentioned in the last post? Quick review:

It will be interesting to monitor the news and see whether reporters mention any of these factors. How were the dogs bred? Did they come from lines with good temperaments? How were they socialized and trained? Were they healthy? [Giant breeds suffer disproportionately from hip dysplasia and other joint problems.] What sort of care did they receive?

TMZ update: the victim may have died from other causes, since the bite wounds did not apear to be life threatening. And those look like mastiffs to me, not bull mastiffs, but what do I know. "Cops say the dogs are very friendly." Nine puppies on the property as well... stay tuned.

The actor discussed dogs during a 1999 interview with the Los Angeles Times, describing a 1-year-old Fila Brasileiro (Brazilian Mastiff) he owned at the time as having been bred to guard slaves.

"It was the only dog they found that had the temperament to guard a slave," Rhames said in the interview. "It could be around you every day, but if you tried to run away..."

And from the Charlotte Observer:

The actor bragged to Time magazine in 2001 that he had "eight Fila Brasileiro mastiffs - the national dog of Brazil, also used by U.S. Marines in jungle warfare."

I could beat my head on rocks.
Posted by Luisa at 3:00 PM

well, the pics don't like like Filas to me.. But Fila's are, I believe, the only dog truly bred to chase and kill people (slaves). Unlike pit bulls of course.

Shades of Spanish mastiffs trained to kill Indians... but that was back in the 1500s.

When did Brazil abolish slavery? 1888, right?

I agree, the pics don't look like Filas. Not that anyone asked me, but aside from one dog being lifted into the AC truck, the dogs in the videos look totally like mastiffs, IMHO.