Culture of fear / Ecology of fear 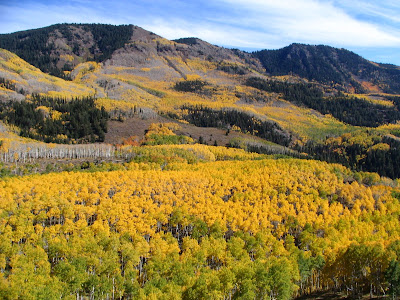 Aspens in fall.
After the bridge tragedy last week, all the newses seemed to have special reports on how to escape a sinking car. And I was paying careful attention until I remembered that I live in the high desert. Heat stroke? Rattlesnake bite? Maybe. But sinking cars? Not even a blip on the local worst-case-scenario radar.

Keeping lots of water in the truck is actually a desirable thing where I live. (When I stopped outside Needles once in 120 F temps to help a couple of stranded motorists -- elderly ladies, without shade in the extreme heat -- I was glad I had gallons of cool water to share.) Flash floods? They happen here, but odds are I'll die in a freeway smash-up long before I'm swept away by a wall of raging water.

Yet there I was, staring at the screen, brows knitted, imagining the truck going under... and thinking to myself that I really ought to laminate those safety instructions and keep them in the glove compartment: What to do if the truck is submerged in deep water: #1. Do not panic...

A few years ago USC sociology prof Barry Glassner wrote a book called The Culture of Fear: Why Americans Are Afraid of the Wrong Things. Glassner's title crossed my mind while I was learning how to save myself from a sinking car, and while I was reading comments about the apparent mauling death -- by really, really big dogs -- of a caretaker on actor Ving Rhames's Brentwood estate.

Comments like: "Those dogs make me uncomfortable, and if one came to our dog park I'd be very worried. Some dogs aren't appropriate as pets."

Well, nobody hunts boars or rabbits or tends sheep in the big city either, so there's no need for great Danes, beagles, border collies or any other dog, really. But so what? There are people who love those breeds and like to keep them. Too big / too active / too dangerous for an urban setting? Pomeranians have killed as many people in Los Angeles as Filas Brasileiros. When you're six weeks old, the 'big dogs do more damage' argument isn't all that meaningful: most dog bite victims are children, after all, and the dog involved is generally the family pet or a friend's dog, according to a recent Minnesota study.

A guy in Chicago -- a newspaper columnist, if I remember right -- proposed a law a few years ago banning all dogs over 30 lb. That should make everyone feel safer, right? In related news, thousands of children in the U.S. are killed each year by their parents; in two weeks alone, last month, four children in Riverside County, CA drowned in swimming pools and three more nearly drowned; over 40,000 Americans die each year in car wrecks; 98,000 die as a result of medical errors, and approximately 50 from bee stings --- but if we ban every dog bigger than a beagle, at least we won’t have to worry about those scary Filas Brasileiros, will we?

You -- and your kids -- are far more likely to drown in the bathtub than be killed by a pit bull, Rottweiler, Fila or Presa Canario.

Your dog is far more likely to die from a bee sting than from an attack by one of those breeds. (A friend of mine has a dog that's allergic to bee stings. The dog goes into anaphylactic shock when stung, or would go into shock, if my friend didn't always keep an epi-pen handy. Dogs die from bee stings all the time.)

Facts are no match for the culture of fear, though, and I imagine we'll be seeing a few politicians and others calling for legislation to outlaw really, really big dogs. Who needs 'em? And besides, what kind of person would want to own one of those things in the first place? Nobody we know.

Wolves were reintroduced to Yellowstone National Park in 1995, and now the Yellowstone elk are avoiding riparian zones --- for the very sensible reason that streambanks provide lots of cover for wolves. For fear of being eaten themselves, elk are no longer feeding on the young aspen shoots along Yellowstone's streams.

A balance has been restored through a process called "the ecology of fear," and for the first time in decades the aspen -- "a beautiful hardwood tree with golden fall color, a key to ecosystem biodiversity and a hallmark feature of mountain areas across the West" -- is growing again in Yellowstone's Northern Range. 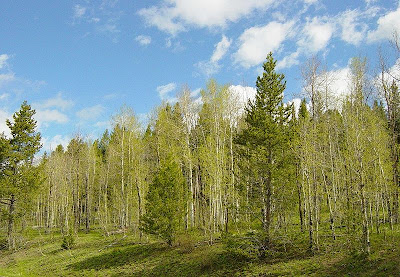 Growing for the first time in half a century. Populus tremuloides: the quaking aspen.
Posted by Luisa at 9:00 PM

Yes, the "what kind of person owns dogs like THAT?" question has been all over the mailing lists. Someone on my Frenchie list was preaching about how 'horrible dogs' like those need to all be banned - and this from people who own a tiny little version of a Bull and Terrier breed.

Why is it that dogs bring out so much stupidity in so many smart people?

One meme I hear enough to give credit to is in regards to the difference between men and women. Specifically that men find women frustrating because men want to fix problems and be done with it, where as women want men to listen and not necessarily solve the issue, but to simply appreciate that it exists.

I believe this particular meme of pop psychology has worked its way into advertising and marketing. The "culture of fear" is in part a marketing ploy to stir up demand for products. There is rarely a fear stirred that does not have some means of resolution that is available in easy installments.

Some products follow the "male" mold and claim to solve the problem outright. Others follow the listen and appreciate mold and serve to acknowledge the issue and aid in enduring it.

Viagra is clearly advertised in the male mold. One pill solves the problem so well, you might even be better off than you were when you were healthy.

Plug-in room fresheners are advertised in the other mold. Smelly teenagers, pet soiled carpets, and odors from cooking are a reality, but at least they are more pleasant to endure with the smell of a meadow or fresh linen wafting from your outlets in timed intervals.

While you might not associate penile pills and plugins with the advertising culture of fear, watch each ad again with fear in mind. Fear that you are pathetic if you don't have a 3 hour erection. Fear that you'll be embarrassed in front of company (notice that house guests nearly always play a roll in these ads) should they smell your dog, your teen, or your tuna noodle casserole. The implication is that you're probably immune to your own stink and you can't reveal your low class hovel lifestyle to your house guests.

I once thought all ads were driven by sex. But I think those that can't exploit that drive use fear instead.