According to a nice phone person in Assemblymember Monning's office as of 7:35 or so.

I sure hope this is the final stake through the heart of [state-wide] mandatory spay/neuter. From my lips to doG's ear...

UPDATE: Then again... see Save Our Dogs for the latest.
UPDATE II: It's 10:15 PM, and darned if this crappy bit of legislation isn't being voted on again. Sheesh.
Aaaaaaand UPDATE III: SB 250 not only merely dead, it's really most sincerely dead.

Huge props to Laura S of Save Our Dogs for all she's done and continues to do for dogs and the Californians who care about them. 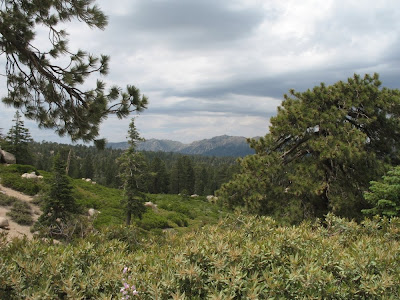 In the San Bernardino Mountains, looking north towards Big Bear Lake from the high country along Forest Road 2N10. Click photos to embiggen.

The San Bernardino Mountains of Southern California are a transverse range, which means they run east-west, unlike most mountain ranges in North America. If I remember correctly, California has the only transverse ranges in the nation. Geology is hella hecka interesting in these parts. Thank you, tectonic plates! The east end of Big Bear Valley is lower in elevation, hotter and drier — Mojave Desert to the east, Sonoran Desert to the south — but the west is green and high and wonderful.

If you're feeling adventurous you can reach Big Bear Lake from the south via Forest Road 1N54: Clark's Grade. Back in the early 1900s this dirt track was the main road to the lake, and visitors generally traveled in the motorized stages operated by White's Mountain Auto Line. My mother's father drove a stage for the Mountain Auto Line every summer while he was a student at USC. I'm looking at his badges right now, along with a photo of Grandpa and his fellow drivers in front of the Freight & Passenger Station at Big Bear Lake. "Registered Chauffeur": 1916, 1917, 1918, 1919. It was in 1919 that my great-grandmother got the lot lease for the cabin.

Clark's Grade was [is] a series of dusty switchbacks, and it must have been an experience to drive up the Grade in an open stage. The descent from Clark's Summit [elevation 8000'] into Big Bear Valley is beautiful. Bluff Lake and Metcalf Meadows are as lovely today as they must have looked to visitors escaping the inland valley heat back in 1916. [Speaking of which: 99F down the hill today — 79F at the cabin.] The stages used to rumble down Mill Creek Road [below our cabin] and pass through the toll gate at Oak Knoll Lodge, and then they'd roll on a few more miles to the other lodges and hotels by the lake.

Nowadays the main roads to Big Bear are City Creek [Highway 330] and Highways 18 and 38. Clark's Grade, the toll gates and the old dirt roads are ancient history. Those roads belong to mountain bikers now, and to high-clearance vehicles like my trusty Ford pickup. On a recent drive to Bluff Lake [it's two/three miles from the cabin] and then east for seven miles to Moonridge via 2N10, we saw maybe a dozen mountain bikers, and just three or four motor vehicles. 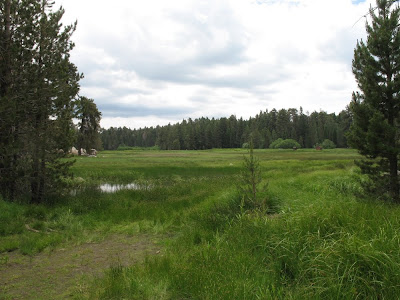 A marshy meadow at the east end of Bluff Lake. 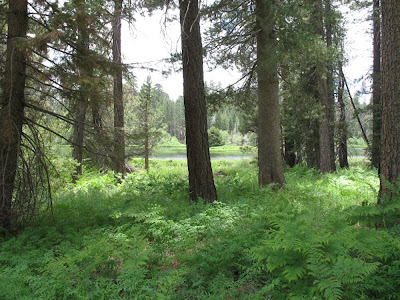 Ferns along the north shore. I was birding here in early June [a month before these photos were taken] and there were no ferns in sight — just pine needles and scattered banks of snow. 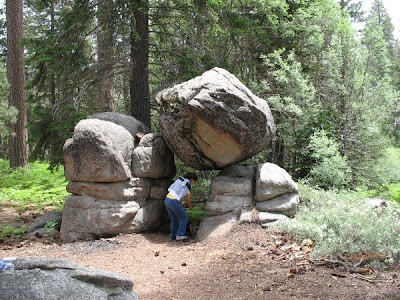 From the gallery of Unfortunate Family Photos: my sis holds a confab with Lily the Pug at one of the forest's countless boulder formations. 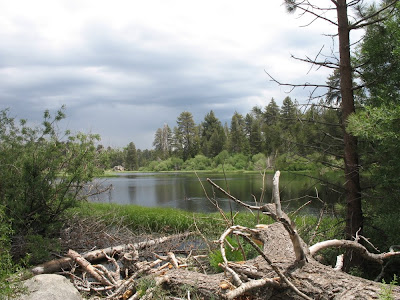 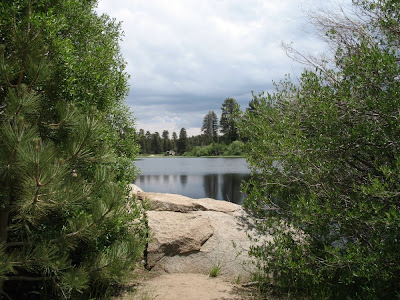 I know what you're thinking: this rock would look better with a pug. 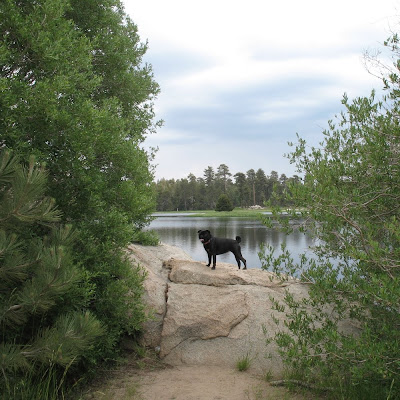 And walla, as we say here in California. Much better. 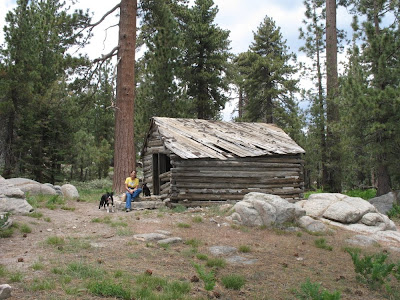 Home, sweet home: old cabin on the north shore of Bluff Lake. From left: Grayling the border collie [who turned eleven in July], my beautiful sis, and the always photogenic Princess LilyPug.
Posted by Luisa at 5:06 PM 1 comment:

Adventure is her middle name

Danger Pug takes care of navigation as we prowl the forest roads. 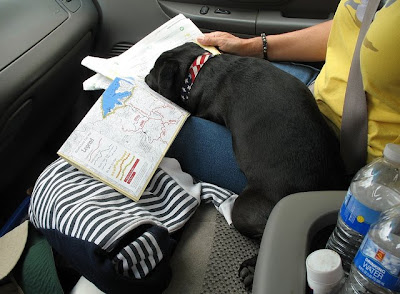 The cuteness: my favorite nuthatch 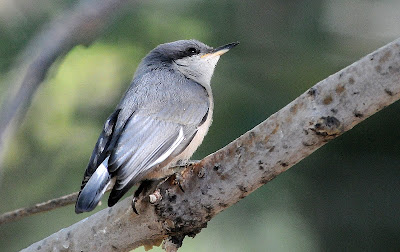 More from the cabin deck. Pygmy Nuthatch photographed by Dianna of L.A. Audubon.
Posted by Luisa at 12:10 PM No comments: 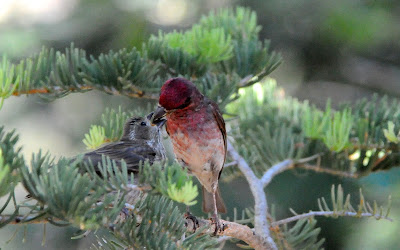 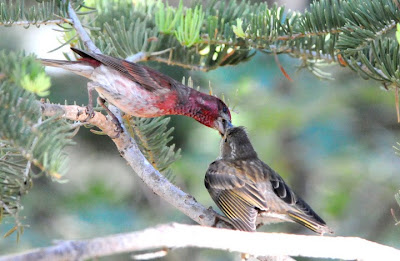 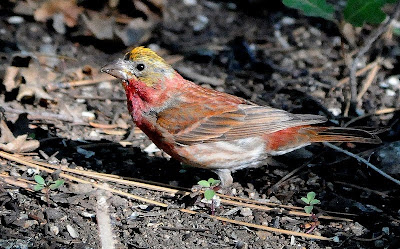 What but fear winged the birds...?

Been summering, off and on, at the family cabin in the San Bernardino National Forest near Big Bear Lake. A most excellent group from L.A. Audubon spent some time on the cabin deck a few weeks ago, and photographer Dianna took this great shot [click to embiggen] of a Cooper's Hawk: 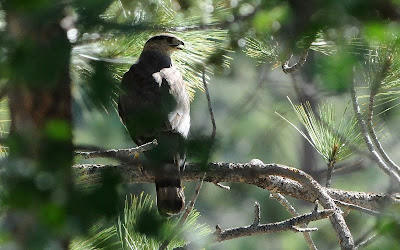 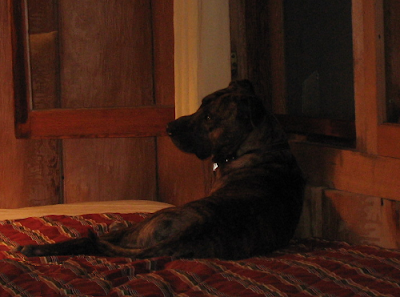 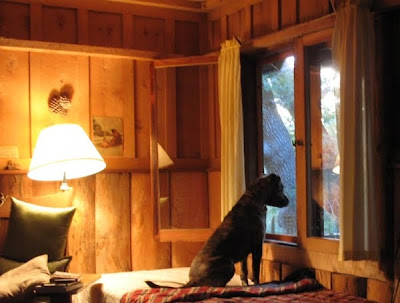 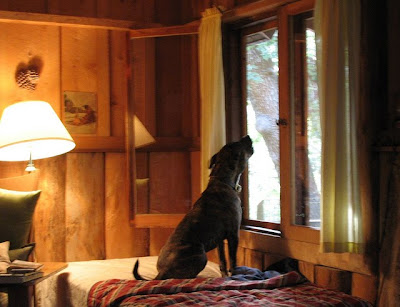 He'll be two in September. Photos from the last few evenings here in God's country, the San Bernardino National Forest near Big Bear Lake.
Posted by Luisa at 4:56 PM 2 comments: 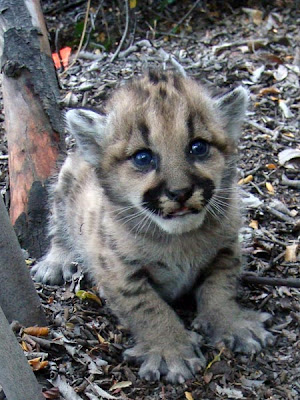 Baby mountain lion in the Santa Monica Mountains. Photo by the good folks of the National Park Service.
Three words: Radioactive. wild. boars.
"When I write to tell you to go outside and experience nature, I am writing inside and you are reading inside and neither of us is outside experiencing nature." True dat.
Mountain lions of the Santa Monica Mountains. Great overview by Gary Valle [H/T CougarMagic]. On second thought, maybe I'll stay inside. [Near midnight here in the San Bernardino National Forest. Plus: radioactive wild boars.] The cuteness! [And oh, the humanity.]
Oklahoma Pre-wash Cycle. Awww.
And finally: Goodbye, Snaffles. Splendid and deeply moving eulogy for a wise, wonderful horse.
Posted by Luisa at 11:35 PM 1 comment:

Shoot-out at the... dog park? This week's edition of cops killing dogs 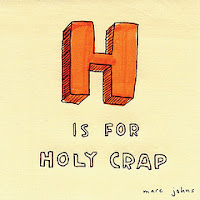 Honestly, it's enough to make me fear for my pups. Over at The Agitator, Radley Balko covers the latest cases of puppycide:

According to resident Anna White, Tonka’s owner, the police shot her pet while it was in a fenced area on her front porch. “We found the shell casing outside by the fence area. Tonka then ran into our house, got onto my bed and died.”

White described her bedroom following the search, claiming Tonka’s body had been dumped from the bed onto the floor and items from her room dropped onto the body and into the dog’s blood. “They destroyed our house and found nothing,” says White. “Tonka lived long enough to die on my bed, which we shared each night.”

Does that tear your heart out, or what? Oh, and this: "When agents searched the home, they found nothing," reported the local paper.
Agents. found. nothing. They tore up the house and killed the family dog, and didn't find a damn thing. Gotta love that War on [some] Drugs.

"Finding nothing" seems to happen with depressing regularity when the family dog is gunned down by police, which brings us to the next case of dog killed by cop:

Stunned dog owners and residents of a Severn neighborhood are shocked that authorities won't be charging a federal police officer who shot and killed a Siberian husky Monday night at a community dog park.

The federal police officer panicked when the husky started playing "fighting" with the officer's German shepherd. According to the husky's owner Rachel Rettaliata, local animal control officials reported that they found no scratch or bite marks on either dog.

And no charges will be filed...! Try to imagine how you'd feel if some panicky Nimrod emptied his gun into one of your dogs for no sane reason under the sun. And got away with it. Damn.
Related:
More Cop-on-Dog Violence
Federal Cop Shoots Dog at a Dog Park. No Charges.
From this blog:
The police definition of "pit bull" often seems to be "any dog we shot."
["Holy Crap" by Marc Johns.]
Posted by Luisa at 10:20 PM 1 comment:

Something important and something good 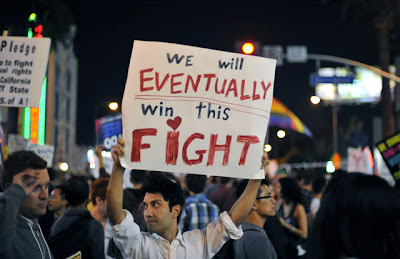 May 26, 2009: Day of Decision Protest in Hollywood. Photo by Tom Andrews/LAist.
"Yesterday’s anticipation has turned into today’s joy," wrote the most excellent political blogger Marcy Wheeler when she got the news. "The court, in a historic opinion and verdict, has declared California’s Proposition 8 to be unconstitutional."

"Fundamental rights may not be submitted to a vote; they depend on the outcome of no elections." Chief US District Judge Vaughn Walker

The opinion is, again as predicted, extremely well written, consummately detailed, brilliantly structured and contains a foundation of extremely well supported findings of fact and conclusions of law. In short, Vaughn Walker has crafted as fine a foundational opinion as could possibly be hoped for, and one that is designed with the intent to withstand appellate scrutiny not just in the 9th Circuit, but in the Supreme Court as well.

Obviously this is but a step in the process because there will be appeals, and the case will, without question, go to the Supreme Court. But, that said, you could not ask for a better platform and posture for a case on this issue to go to the Supremes on. It is all that and more [...]

Today is one of those rare seminal days where something important and something good has occurred. Fantastic. The beauty and joy of equality, due process and equal protection under the Constitution of the United States of America.

Gov. Schwarzenegger issued a statement saying, "For the hundreds of thousands of Californians in gay and lesbian households who are managing their day-to-day lives, this decision affirms the full legal protections and safeguards I believe everyone deserves."

Yay, Governator! Yay, California! And a big, giant, standing ovation for the beauty and joy of equality, due process and equal protection under the Constitution of the United States of America.
Posted by Luisa at 9:20 PM No comments: