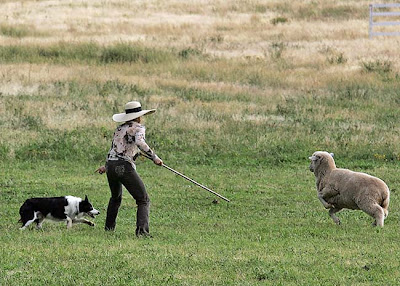 "This one." Amanda Milliken and Bart at the shed. Photo by Denise Wall: used with permission.
The 20th annual Kingston Sheep Dog Trials continue this weekend at Grass Creek Park in [where else] Kingston, Ontario. The woman behind the trials is Amanda Milliken, in the photo above at Meeker, Colorado with her 2005 National Champion Bart. Amanda is one of the finest sheepdog handlers in North America and a tireless advocate for the working border collie.
The judge at Kingston this year is Frank Cashen of Ireland, who won the International in 1997 with his Jan.

Kingston is made up of two Open trials, each taking two days to run. Open dogs will be finishing up on Saturday, and on Sunday the top 20 dogs will run in a Double Lift Championship: the ultimate trials challenge for a working border collie. Pro-Novice dogs will run on Monday.

Near the handler's post the dog brings the sheep into a circle 40 yards in diameter, sometimes marked with chalk, sometimes sawdust: the shedding ring. At this point the handler may leave the post, and usually does so quickly, since there is a 30-minute time limit for each run and what comes next is especially unpredictable. Five of the twenty sheep are marked with colored collars. Inside the shedding ring, "[t]he sheep will be passed between the handler and his/her dog and the dog brought in to stop and hold the marked sheep."

How simple in theory, and how challenging in practice. If the dog manages to come through at precisely the right time, time after time, and hold the five marked sheep in the shedding ring as the 15 unmarked ones drift, trot or bolt away individually or in groups, then the next element is the pen. It's 9 by 8 feet, with a six-foot rope attached to the gate, and the handler must open the gate and hang onto the rope until the dog has put the five marked sheep in the pen, or until the judge calls time --- whichever happens first.

I've run a dog just once on an international course. The shed was a fluke and we timed out running to the pen, but as long as I live I'll remember what those half-mile gathers looked like from the granite outcropping that served as the handler's post, and how I felt afterwards, standing next to my bright-eyed little dog as she cooled down in the water trough. Good girl, Bracken.