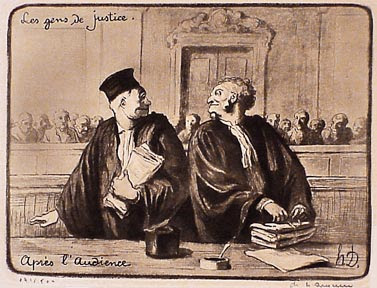 Daumier: After the hearing

Bigotry and her ugly baby daddy Stupidity spawned a jaw-dropper of a court decision in Ohio last Wednesday.

The Ohio Supreme Court's pro-BSL ruling makes no sense --- and worse, it follows on the heels of an appellate court decision authored by actual intelligent people. The case in question involves Paul Tellings, cited in 2003 by an animal warden for possessing more than one pit bull. Tellings' dogs were not aggressive, nor had they been cited for running loose or causing problems. He just had three of them. In 2006 the 6th District Court of Appeals ruled in Tellings' favor and against Toledo's breed-specific laws:

"Since we conclude that there is no evidence that pit bulls are inherently dangerous or vicious, then the city ordinance limitation on ownership is also arbitrary, unreasonable, and discriminatory," Judge Skow wrote. "If a citizen may own more than one nonvicious dog of a particular breed, then ownership of more than one nonvicious pit bull has no rational, real, or substantial relationship to a legitimate government interest."

B-b-b-b-but, they're pit bulls!, protested the Ohio Supreme Court last week. Multiple German shepherds, multiple Rottweilers, multiple bullmastiffs, a pack of really nasty mixes trained to be aggressive --- those are OK. But no more than one pit bull, ruled the court. [Oh, and be sure to muzzle that evil thing whenever you take it for a walk.] In the absence of a shred of real evidence, the court's decision was based on the testimony of a Toledo dog warden who believes all pit bulls are, you know, "bred to kill." Like Petey. Like Buster Brown's Tige. Like the Lawdogs.

As I've said before, just because a meth dealer's abused dog charges a cop doesn't mean my good dog is a bite risk. Why on earth is this so difficult for some people to understand? I know, I know... boundless, staggering ignorance... highly educated types who assume they know a lot about dogs when they know absolutely nothing... But what a crying shame they had to be justices on the Ohio Supreme Court.

For a more measured response to the Ohio decision, see Christine's opinion over at the BAD RAP blog. Christine is BAD RAP's Legislative Affairs Director, and as wise and rational a voice as anyone could wish.

And here is the ASPCA's opinion on the Ohio ruling:

NEW YORK, August 3, 2007—The ASPCA® (The American Society for the Prevention of Cruelty to Animals®) today said it was disappointed in the Ohio Supreme Court’s recent decision to support Ohio and Toledo’s discriminatory breed-specific laws, overturning a 2006 Ohio Appellate Court decision finding the ordinances to be unconstitutional [...]

“I am concerned that this decision may result in the suffering and deaths of thousands of blameless animals,” said Ed Sayres, president & CEO of the ASPCA. “This type of ‘canine profiling’ is extremely detrimental to the human-animal bond. Dogs, like people, should be judged on their own merit, regardless of breed. Moreover, we have seen time and time again that responsible pet ownership is the key to successfully resolving the dangerous dog issue—and this decision does not take that into consideration.”

There is no evidence that breed-specific legislation—which is costly and difficult to enforce—make communities safer for human families or for the companion animals that are a part of so many households. In fact, in a survey of Ohio animal control agencies cited in a 2006 JAVMA (Journal of the American Veterinary Medical Association) article, the Ohio State University College of Veterinary Medicine found that despite a substantial increase in the destruction of dogs deemed to be pit bulls since enactment of the state’s pit bull law in 1987, the number of animal control agencies reporting the existence of dog fighting also doubled during this time.

By contrast, Lawrence, Kans. animal control reports a substantial decrease in animal cruelty and dog fighting complaints in the wake of the enactment of a breed-neutral anti-chaining law. Or take Multnomah County, Ore., where a breed-neutral ordinance imposing graduated penalties on dog and owners, according to the seriousness of the dogs’ behavior, has reduced repeat injurious bites from 25 percent to 7 percent between 1981 and 1989.

The dog pound in Cambridge, Ohio walked in to my mom's yard and took her 1yr old Pit off of his chain. She looked for him for three days before she found him at the pound. She had no knowledge of the new law. She's just a single older lady living alone with a dog. The fact that they removed him instead of warning her. Tank has never shown any signs of aggression. He is so sweet. the neighbor kids love to play with him. This has to be one of the worst slaps in the face that Ohio can give to the APBT. So now Tank is at the pound. they told my mother to get liability insurance and a muzzle. Oh but here's the thing folks.. According to the few places I could find information on liability insurance, They state that if the dog is "banned" or deemed a "vicious dog" the insurance is VOID.... How can you get insurance on a dog if .......

I would buy the insurance for my mom. I have provided all of the Vet care, shots, heart worm prev. and made sure he eats good food. I made sure all she had to do was love him. And she did. Do you know Tank is scared of the dark? Oh how vicious... and he likes to lick a childs face if you say "Tank, kiss a baby" He snores IN bed at night.. And he likes to hog the pillows.

If this poor dog dies because of the Ignorance of the Wonderful Ohio court system it will be a shame. I just found out tonight that she is going through this. Animal Control came and stole him a week ago. I will do what it takes to get him back to HIS WONDERFUL, LOVING, NOW VERY SAD WITHOUT HIM HOME. My mom can't afford insurance. She can hardly afford to live. (thats why i pay vet bills.) She feeds him good and loves him.. He doesn't hurt a flea. Isn't that what matters?