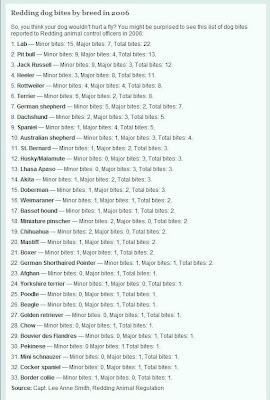 Redding dog bites by breed, 2006, from the Record Searchlight online. [Click to enlarge.]
Redding, California has identified "the most bite-prone dogs within the city limits," based on animal control statistics: Labrador retrievers.

Haven Human Society president Norm Ryan said his animal regulation officers' statistics show pit bulls are not the most bite-prone dogs within the city limits. That dubious distinction goes to Labrador retrievers. Labs accounted for 22 bites, seven of which were serious, in 2006, according to Haven.

Pit bulls came in second, however, with a tally of 13 bites, four of which were serious. With 12 reported bites, the Jack Russell terrier was No. 3. "What, are we going to ban Jack Russell terriers, too?" Ryan said, laughing at the idea of a ban on pit bulls.

I love rational people. Read the rest of Ryan Sabalow's article here, and a follow-up editorial here. And keep in mind the words of the AVMA task force: "Dog bite statistics are not really statistics, and they do not give an accurate picture of dogs that bite." 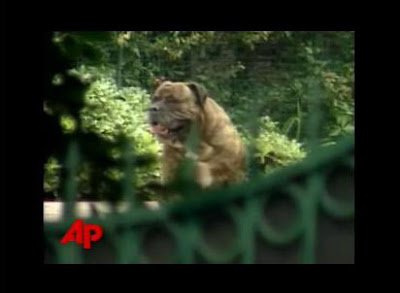 A mastiff on Ving Rhames's estate in Brentwood.

Jacob Adams, the man originally thought to have been mauled to death by mastiffs belonging to actor Ving Rhames, was not killed by the dogs, according to a West Los Angeles PD spokesman.

Whatever spurred one of the 90-kilogram mastiffs to give chase had Mr. Adams running so hard that police found his shoes more than nine metres from where his body was discovered.
“He made it to the gate, he got the gate closed to keep the dogs inside that grassy area, and he collapsed on the other side of that gate, about three feet from it,” said West Los Angeles Lieutenant Ray Lombardo.

When police arrived, the dogs – one with blood on its right forepaw; the other so old it hardly had any teeth – were running around freely on the lawn. Mr. Adams was pronounced dead at the scene.

Tuesday, the dogs were still in the custody of animal control.

Mr. Rhames's wife told police Tuesday that the dogs, which the family has owned for about seven years, were very gentle.

“She said she has two young children and that the dogs had never viciously turned on anybody,” Lt. Lombardo said.

Most of the bites were superficial, the Los Angeles coroner's office said Tuesday. It was also determined that Mr. Adams did not die of a heart attack and did not have any clogged arteries. The body is now being sent in for toxicology tests.

“At this point, it's simply a mystery. We're ruling it an undetermined death,” Lt. Lombardo said.

He believes the dogs – “they're big dogs; they look like lions,” he said – sensed something was wrong with Mr. Adams and were trying to help him by pulling on him. There were no bites on the head or neck.