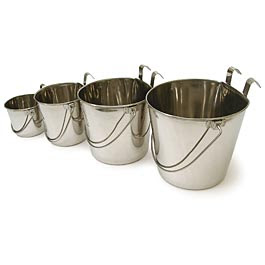 Hot tip from Diane at DeltaBluez Stockdogs: these stainless steel pails are on sale from Jeffers Equine, half-ish price, today only. [Doctors Foster and Smith link here, for comparison shoppers.] If Diane recommends these, they're the real deal. I love pails like this and have a bunch of 'em, all sizes.

Again, Diane says these pails are on sale today only. You snooze, you lose, etc. Thanks, Diane!
Posted by Luisa at 2:08 PM 2 comments:

Email ThisBlogThis!Share to TwitterShare to FacebookShare to Pinterest
Labels: stuff to buy

First off, via Janeen of SmartDogs [on Facebook], here's the Poop Fairy PSA. Awesome. And from the beautiful Northwest via Rachel Maddow, here's a swell video on the same topic. Martin Luther [with sidekick Lola] sings it:

"Corporate personhood": much like a dog turd, it smells nasty, fosters parasites, and needs proper disposal. Consider that one little house on the prairie serves as the headquarters for 2,000 different corporations, some linked to criminals:


[The Reuters article] shows how critical these secrecy jurisdictions are to making corporations a vehicle of crime and other abuse. And, as [Nicholas] Shaxson has shown, secrecy jurisdictions are also a key tool for corporations to avoid paying their fair share and for dictators to loot their countries. These kinds of incorporation services are a key tool to sucking the money out of the legitimate economy.

At a time when SCOTUS is giving corporations –- even flimsy entities like the scraps of paper at 2710 Thomes –- more rights than actual citizens, it pays to understand how easy it is for people to avail themselves of corporate personhood.

The good folks at Move to Amend have the novel idea that human beings, not corporations, are persons entitled to constitutional rights. "End corporate rule. Legalize democracy," is their motto. Good luck [wry face]. Seriously, it would be nice if some vestige of government of the people, by the people and for the people rose up and kicked corporate personhood's fat butt to the curb.

Poop Week over at the most excellent 10,000 Birds was totally awesome.


"First of all, every birder backpack, rucksack, or other holder of materials should have toilet paper, or, failing that, tissues. Don’t resort to what I had to do once in the vicinity of the East Pond of Jamaica Bay and emerge sockless from the bushes."

Still laughing at that one. Yes, I'm twelve. Check out links to all the posts here.

You knew possums are resistant to snake venom, right? Turns out their ossum super power has to do with one blood protein:


Since the evolutionary origin of the family, the vWF [von Willebrand Factor] of opossum species that prey on snakes has accumulated more changes than vWF in non-snake-eating species. That's circumstantial evidence for the effect of natural selection continuously acting on vWF over millions of years. Jansa and Voss picked out several specific changes that are unique to snake-eating opossums, and found that they're associated with a region of vWF that is known to bind with one of the toxins in pit viper venom.

Read all about it at Jeremy B. Yoder's terrific Denim and Tweed science blog.

India's vultures have all but disappeared. Feral dogs have filled the void:


In the decade of major vulture decline, from 1992 to 2003, one estimate showed dog populations increasing by a third, up to nearly 30 million. The escalation of the dog population corresponds perfectly with the disappearance of India’s vultures.

Read about the dogs and the last Indian vultures here.

[Both links above from Ed Yong'd addictive blog, Not Exactly Rocket Science.

More links, and Pam Kling's you-are-there-as-the-rattlesnake-strikes photos, over at my newish, mostly-birding blog, Crow and Raven.
Posted by Luisa at 1:51 PM No comments: