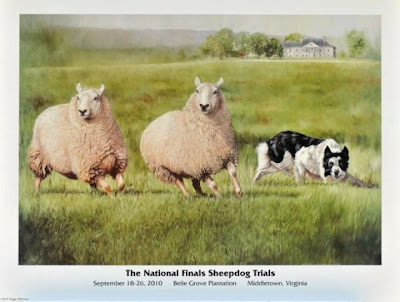 Now with live streaming video of the 40 semi-final runs on Saturday and the double-lift final on Sunday! Awesome.
Jenny Glen is providing great play-by play here, and Heather Nadelman is doing yeoman's work and much more here. Check out additional reports from top competitors Bev Lambert and Robin French.

Have I mentioned that the splendid border collies at the National Finals are the best working sheepdogs in North America? Slick-coated, rough-coated, wire-faced [Polly Matzinger's James ran in the Finals on Wednesday] — yet for all their diversity in appearance, how similar they are in their aptitude for the work! Eileen Stein explains:

[As you can imagine, this sort of talk gives conformation breeders apoplexy.]

Here's a lovely sheepdog trial photo, though there are no sheep in sight: this is Dennis Birchall with Mossie and Flash, the 2009 International Brace Champions. Yes, those are border collies. How I love slick-coats: 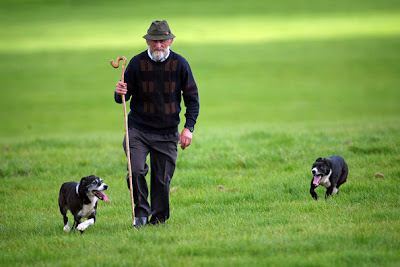 Dennis Birchall has won the Irish National six times, and is one of four most excellent judges at Belle Grove for our 2010 National Finals. Dennis, Mossie and Flash represented Ireland again this year at the International Supreme Championship in County Antrim, Northern Ireland, a county whose motto, fittingly enough, is "Through trial to triumph," but the triumph in brace this time went to Richard Hutchinson with Roy and Sweep. Michael Gallagher and Cap were 2010 International Supreme Champions — you can find more results at the ISDS website here.
Yes, I am insanely jealous of all the handlers, dog bloggers and others attending the Finals at Belle Grove. Thank god for that streaming video, is all I can say.
Related:
About the double lift
About the International shed
Great read: The Dog Wars by Donald McCaig
Zamora Hills [and some dog show]
This is not herding.
Posted by Luisa at 10:15 PM 6 comments: 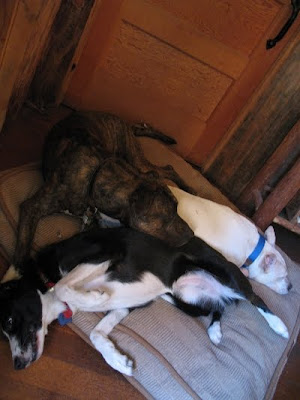 Yes, it's hard for the dogs to stay put, what with the fun-house floors and all. They keep me awake all night with their rolling from one end of the cabin to the other [sigh]. 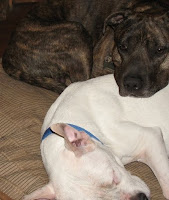 Walla, I'll have y'all know, is not just an Indian suffix indicating a person involved in some kind of activity, or half the name of a county seat in the northwest. No, readers, "walla" is a loan word, and this most excellent spelling was invented by a west coast rancher and sheepdogger. He was headed to Canada to judge a trial in 2002:

For me it started getting on the plane from San Francisco, California, USA. I knew it was going to be a challenge because my passport hadn't come in and the officials said I needed 2 federal picture I.D.'s. After all the hoopla and dance the official asked if I had a Costco Card with my picture on it and walla, I had it and on we go. [From Sheepdog-L.]

Can't see that happening in today's police state land o' the free, now, can we?

But anyhow. I can't think of Costco these days without 1) saying Walla! to myself, or 2) thinking of cheap dog-beds. Huge, cheap dog-beds. Bounce was sleeping on one of them this morning, and then Smoke curled up next to her, and then the landshark came diving in for some Smoke-wuv, and there I was trying to aim over my shoulder with the little point 'n' shoot. Good times, good times ;~)
Posted by Luisa at 11:48 AM 3 comments: 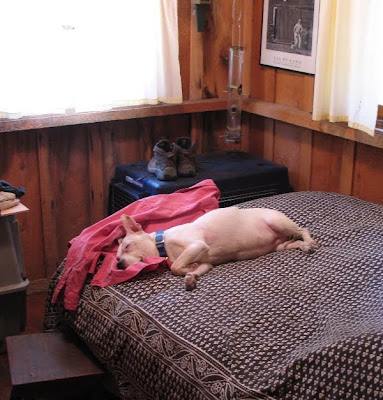