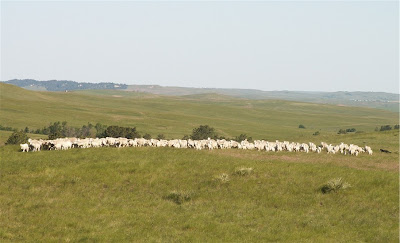 God's country: Zac brings in the girls on the L & M ranch in South Dakota. All photos courtesy of Laura Hicks; used with permission. [Click on the photos for a larger view.]

Mike and Laura Hicks own the L & M Ranch in the southwestern part of South Dakota, not far from Badlands National Park. Mike and Laura, along with their sons Dustin and Brady, run a commercial cow/calf operation and raise sheep and good ranch horses. They raise good dogs, too.

Laura grew up with Australian shepherds, but she and Mike use border collies on their ranch. Laura writes: "The dogs are invaluable in helping gather pastures in the fall. They are great about sweeping the tree filled draws. It takes about half the riders it used to with the dogs helping now. The dogs are used in almost every aspect of the place now." She says, "If we could figure out how to teach them to drive a staple or stretch wire, we might get them more involved in fencing, too. As it is now, they prefer to supervise."

Here are a few members of the hard-working L & M Ranch crew. First is Laura's Zac, who made the double lift final at Meeker and placed 6th in the double lift at this year's National Cattledog Finals in Torrington, Wyoming. Zac is cooling down after helping to move some bulls: 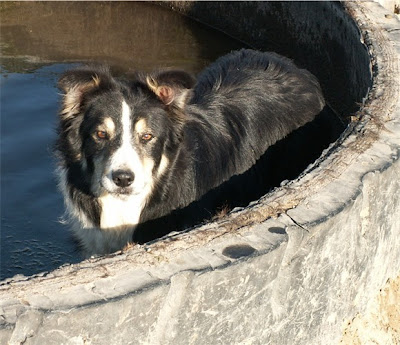 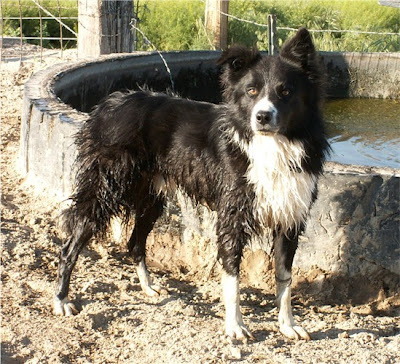 Intense Uno keeps an eye on the stock: 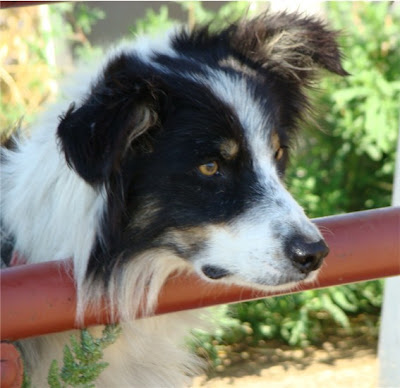 This photo of Zac and Laura was taken at the Meeker Classic Sheepdog Championship in Colorado. Laura calls Zac an assertive, biddable dog, fearless "but not stupid," who "came out of the womb knowing he’s capable of moving anything." Zac won the Best Drive award at Meeker in 2006, and Laura received the Shining Star Award. They are entered at Meeker again this year. 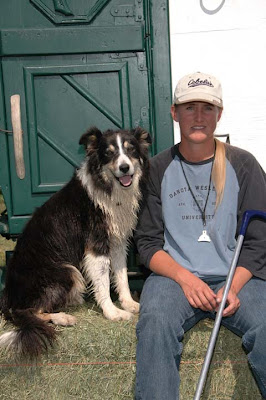