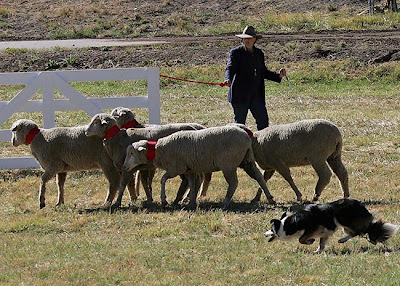 After the challenging double lift at Grass Creek, Bev Lambert's Pippa was tied for first place with Amanda Milliken's Ethel [the second most famous Ethel in the world of working border collies].

The tie was broken by a regular Open run. According to a spectator kind enough to share details on the Border Collie Boards, Amanda's Ethel went first and had a fine run, but timed out at the pen. Eleven year old Pippa, who had finished a demanding International run just a couple hours before, got around the Open course [400 yard outrun, 450 yard drive], got the shed, pen and single, and won Kingston 2007. [The photo above is of Pippa at the pen with Bev at Soldier Hollow, where they won the double lift final in 2004 and 2005.]
*************
In other not-news, my Cheviots will be home on the farm soon and I promise there will be photos at last.
*************

Soldier Hollow is two weeks away, and this year's National Sheepdog Finals are just around the corner, too: they'll be held at Gettysburg, Pennsylvania September 18 - 26. The trial should be a great one. Top 150 dogs qualify.

In the UK, a parent is furious that nothing can be done about the dog that attacked her child:

A Merseyside police spokesman said there were a number of different offences covered by dangerous dog legislation, but none applied in this case.

The dog could be seized by police if it was one of four officially “dangerous” breeds – American pit bull, Japanese tosa, fila Brasiliero or dogo Argentino.

For any other breed the attack must happen in public or be one of a number of incidents involving the same animal for action to be taken.
The police spokesman said this attack was not in a public place and was the first incident involving the shih-tzu.

Last year doctors at Alder Hey’s A&E department said they were treating the equivalent of a child a day for injuries caused by dog attacks, with one in five needing further treatment on more serious wounds.