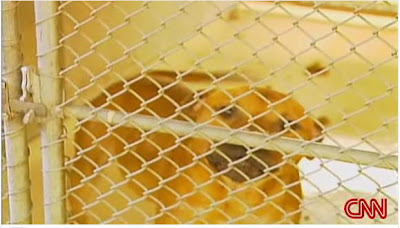 Ears back, tail a blur: good luck, boy.
It wouldn't be the first time that BAD RAP and the ASPCA have combined forces to save pit bulls.

NEW YORK, August 23, 2007—The ASPCA® (The American Society for the Prevention of Cruelty to Animals®) today confirmed that it is assisting the USDA in the evaluation of the dogs seized from Michael Vick's Surry County, Va., property. Further details are not possible at this time.

Ed Sayres, president and CEO of the ASPCA® (The American Society for the Prevention of Cruelty to Animals®), will be available for in-person interviews in Richmond, Va. on Monday, August 27, when Michael Vick is scheduled to appear in a U.S. District Court to plead guilty to federal charges of conspiracy to travel in interstate commerce in aid of unlawful activities (“Travel Act”), and conspiracy to sponsor a dog in an animal fighting venture.

The ASPCA also has several other subject matter experts located in New York City and around the country who can speak to the media on request, including its Humane Law Enforcement officers (featured on Animal Planet’s “Animal Precinct”) on animal cruelty and the link between animal cruelty and human cruelty.

On July 23, the ASPCA announced that it was assisting federal authorities in this investigation. On August 23, the organization confirmed that it is assisting the USDA in evaluating the dogs seized in the Michael Vick case.

Pit bull groups have been maneuvering to get permission to evaluate and save at least some of Vick's dogs, said Donna Reynolds, executive director of Bad Rap, a California pit bull advocacy and rescue group.

"We expect to have an announcement next week," she said.

Generally, even pit bulls that have been trained to fight have a good disposition toward people but are often a danger toward other dogs, experts say. Trainers, such as Good, Jessup and Reynolds, say they can easily identify a vicious pit bull that can't be rehabilitated. But they said Vick's dogs should be sent to organizations that will evaluate the dogs, rehabilitate the ones deemed salvageable and then screen potential owners to ensure the animals end up with the right people.

Good said he owns three pit bulls, once fighting dogs but now socialized, that have become great pets. Reynolds said she has a battle-scarred female she rescued and it doesn't attack other dogs on impulse. She keeps it out of potentially provocative situations.

"No matter what the public decides to think about Vick's dogs, I think we can learn a lot from this situation, if we can get past the stereotypes that they're ticking time bombs or fighting machines," Reynolds said. "As long as the dog is going to be well-behaved on the leash, it can go on walks. They don't have to go to the dog park. Dogs don't have to be friends [with other dogs]."

When it comes to evaluating a dog, you won't find anyone more honest, more pragmatic or more realistic than Donna Reynolds. She says, "Temperament is the ONLY thing to rescue for." Diane Jessup is the same --- she'd never spring an iffy dog.

The "boundless, staggering ignorance" award of the day goes to Ann Chynoweth of the HSUS for claiming that "temperament testing on pit bulls is very difficult." No, Ann. Border collies can be an interesting challenge, but pit bulls are easy: the good ones are so very, very good, and the bad ones stick out like a sore thumb.

Chynowyth's statement demonstrates how little the HSUS seems to know about dogs in general, and pit bulls in particular. All the more reason for BAD RAP and the ASPCA to evaluate the dogs that used to belong to Michael Vick.

"I think it is easy to brush these dogs under the rug when there are groups out there who are willing to step up and help," [Jessup] said. "If these were German shepherds, this wouldn't even be part of the discussion."

In related news [news you missed, because it was just a paragraph buried in Delaware Online]:

DOG MAULS GIRL: A 12-year-old Newark girl was in serious condition with head and scalp injuries at Christiana Hospital after a German shepherd attacked her Thursday afternoon. The girl was in her neighbor's yard on Strickland Court about 4:30 p.m., helping to clean up after the 4- to-5-year-old dog, when the animal mauled her for an unknown reason, said New Castle County police spokesman Cpl. Trinidad Navarro. The Kent County SPCA will investigate.

She must have misread the dog's intentions --- it was probably trying to pull her away from danger.

The attack took place August 16, and I can't find any follow-up reports on the child's condition. I hope she will make a full recovery. In one of life's little ironies, Delaware Online reported the day before the attack that the City Council of Dover had proposed an animal ordinance designating specific breeds of dogs as dangerous. The German shepherd wasn't mentioned.

Reminds me of an Australian news report from July 2006:

A third dog attack in two days has left Local Government Minister Kerry Hickey conceding defeat over how to solve the problem.

Despite claiming NSW had the "harshest" dog laws in Australia, Mr Hickey yesterday said he was at "pains" to find a way to halt the spate of attacks.

He rejected calls to expand the restricted dog breed list, calling it a "knee-jerk" reaction.

"If I keep expanding the restricted breed list, we will have no dogs left in NSW," he said.

That's the thing about BSL: its basic premise is incorrect, and it doesn't work. As Dr. Karen Overall writes,

"Breed specific laws are not based in science... [Laws] banning breeds will not make you safer, and the illusion that they will do so is dangerous to humans and unfair to dogs."