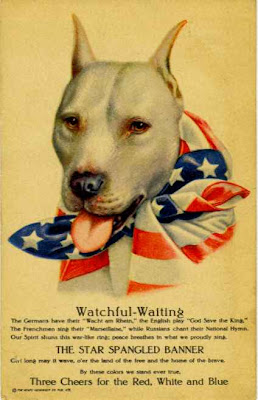 The dog that once symbolized a nation.

Richmond criminal defense attorney Michael Morchower: "They have positioned [the case] so well that [Vick] has very little if any choice but to plead himself. They drafted a masterful indictment and they had more evidence to up the ante."

"They" are Assistant U.S. attorneys Michael Gill and Brian Whisler, the lead prosecutors overseeing the federal case against Michael Vick. Both men are known for their smarts, their work ethic, their honesty and their tenacity: "If I had Michael Gill on my [butt], I'd cop a plea post haste," says the man who served as Gill's boss in the U.S. attorney's office in Dallas.

Read about the good guys here.

A Pet Connection poster linked to an ESPN story:

When I read that bit, "at least three dogs survived the hanging attempt," I remembered a nightmarish abuse case from a couple years back. How does a dog survive a "hanging attempt"? How long does that desperate struggle last? And Vick and his friends, according to ESPN's sources, took the surviving dogs down --- those poor, terrified animals --- and drowned them. If this is true, Vick, Peace and Phillips richly deserve prison sentences, and the NFL should take steps to insure that Michael Vick never plays football again.

I sadly predict that Vick will cop to animal abuse for the hanging/drowning incidents, take a substantial fine and community service. There will be no plea regarding dogfighting or gambling and those charges will be dropped

In 2 years he'll be back playing football.