Your tax dollars at work: "A lawless act by law enforcement" 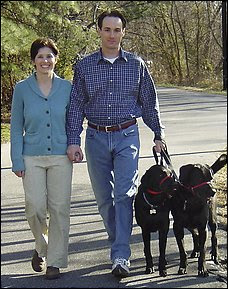 Mayor Cheye Calvo and his wife, Trinity Tomsic, with their dogs Chase, left, and Payton. Both dogs were shot and killed during a home invasion — by "law enforcement."
Gotta love that war on [some] drugs. Warrant? We don't need no stinkin' warrant! We'll smash your door in and shoot your dogs, and if we want to interrogate you for a couple hours while your dead Labradors lie in pools of blood at your feet, we'll do that too, you big crybabies.

The drug raid by Prince George's County law officers on the home of Berwyn Heights Mayor Cheye Calvo last week was a Keystone Kops operation from start to finish.

Acting on a tip that a 32-pound package of marijuana had been sent by Federal Express from Arizona to Mr. Calvo's home (addressed to his wife, Trinity Tomsic), Prince George's police swung into action. Which is to say they got on the phone, calling law enforcement agencies to see who might have a SWAT team available to bust the unsuspecting Calvo family. (It seems the police department's own team was tied up.) After being turned down at least once, they finally struck a deal with the Prince George's Sheriff's Office, whose track record with domestic disputes is extensive but whose experience with drug busts is slight. And it showed.

Without bothering to alert Berwyn Heights police, sheriff's deputies moved into position. Posing as a deliveryman, a deputy took the package to the family's door. After Mr. Calvo's mother-in-law initially refused to sign for it, the package was finally taken into the home, where it sat, unopened, on the living room floor. Whereupon the deputies, guns drawn, kicked in the door, stormed the house and shot to death the Calvos' two Labrador retrievers, one of them, apparently, as it attempted to flee. The canine threat thus dispatched, the mayor -- in his briefs -- and his mother-in-law were handcuffed and interrogated in close proximity to the bloodied corpses of their dogs.

And it turns out — our bad! — that the deputies didn't have a no-knock warrant. The whole mess was, in the words of the Calvo family's attorney, "a lawless act by law enforcement." The WaPo has done a good job covering this one:

Some doubt mayor's ties to drugs

And this hopeful news: FBI to Review Raid That Killed Mayor's Dogs.

"We have witnessed a frightening law enforcement culture in which the law is disregarded, the rights of innocent occupants are ignored and the rights of innocent animals mean nothing," Calvo said, surrounded by county elected leaders and friends on the front lawn of his house. "A shadow was cast over our good names. We were harmed by the very people who took an oath to protect us."

June White Dillard, president of the NAACP's local chapter, also called for a thorough investigation and said Calvo experienced police action familiar to many young black men in the county.

Lima, Ohio -- A white police officer was acquitted Monday in the drug-raid shooting death of an unarmed black woman that set off protests about how police treat minorities in a city where one in four residents is black.

The all-white jury found Sgt. Joseph Chavalia not guilty on misdemeanor charges of negligent homicide and negligent assault. He had faced up to eight months in jail if convicted of both counts.

Chavalia shot 26-year-old Tarika Wilson and her year-old son, whom she was holding, during a SWAT raid on her house on Jan. 4. Wilson was killed and her son was hit in the shoulder and hand. One of his fingers had to be amputated.

Prosecutors said Chavalia recklessly fired three shots into a bedroom where Wilson and her six children were gathered, even though he could not clearly see her or whether she had a weapon.

"He couldn't tell Tarika had a child in her arms," Prosecutor Jeffrey Strausbaugh said during closing arguments.

Chavalia, an officer for 32 years, had testified that he thought his life was in danger when he fired the shots. He said he saw a shadow coming from behind the partially open bedroom door and heard gunshots that he thought were aimed at him. The gunfire he heard was coming from downstairs, where officers shot two charging pit bulls.

From 2006: Government Goons Murder Puppies: The drug war goes to the dogs.
Posted by Luisa at 1:34 PM

as horrible as this is, at least this mayor can get some publicity. this happens all too often! but to people who can't or don't complain and sue. last week, the local PD shot a sweet little cream-colored shepherd mix while we were en route. they said she was charging them and acting vicious. you would laugh (and then cry) if you could see this little dog, who was sweet as could be with a huge hole in her side. she's doing fine now, thankfully.

Another Sheriff's Department acting unprofessionally and out of control. How long before these yahoos have to see some accountability for their "enforcement" techniques?

I respect and admire law enforcement and emergency services, BUT I expect them to be well-trained professionals, not cowboys.