On the suffering of sentient creatures 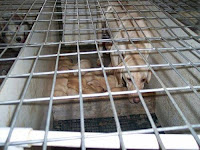 They say that if you need to be rescued, don't scream, "I'm being murdered [or robbed, or whatever]!" If you do, no one will help you. The way to make everyone come running, they say, is to shout, "Fire!" Hence the puppy mill photo and the nonspecific title.

Over 100 hundred people showed up for tonight's candlelight vigil to remember the 80 dogs that were shot to death by Elmer and Ammon Zimmerman. We walked along Rt. 222 onto to the lane where Elmer lives. Bill Smith of Mainline Rescue carried 80 white chrysanthemums representing one for each dog killed. As Bill walked down the lane by himself, the crowd sang Amazing Grace. It was a heart-wrenching moment for me personally as I was unable to hold back the tears knowing those dogs were shot just yards away from where the crowd was gathered. [Source.]

Most pet blogs have covered the story of the needless deaths of those 80 puppy mill dogs in Pennsylvania, and printed the names of legislators to contact. It is altogether fitting and proper that they should do this.

But if there is a special place in hell for puppy millers [and many of us would like to imagine that there is], it can't be any hotter than the place reserved for the men and women who mistreated — tortured — Jason Ng.

From the Request for Investigation:

It is hereby requested that an investigation be conducted into the death of Mr. Hiu Lui Ng (“Mr. Ng”) (Alien No: A73-558-364), a former detainee of the Donald W. Wyatt Detention Facility in Central Falls, RI, the Franklin County Jail in St. Albans, VT and the Jail & House of Corrections in Greenfield, MA. On or about August 6, 2008, Mr. Ng died of complications related to cancer and/or a fractured spine.

Upon information and belief, Mr. Ng had complained of various medical problems while at the above-listed facilities, but did not receive proper medical examinations and/or care. Requests to be examined by an outside doctor were also denied. The denial of medical care occurred in the face of Mr. Ng’s documented 23-lbs weight-loss in a ten week span while detained at the Franklin County Jail in St. Albans, VT in the spring of 2008.

The denial of medical care also occurred despite Mr. Ng’s loss of movement in his lower extremities while at the Wyatt Detention Facility.

Mr. Ng informed us prior to his death that, in early July 2008, he was relocated several times within the Wyatt Detention Facility. At the time, he already was suffering from back pain. Each time he was relocated, Mr. Ng was required to carry his personal belongings and the mattress that had been assigned to him. Because he was assigned an upper bunk, he was required to lift the mattress above his head and place it on the bed. Also, since there was no ladder access to the upper bunk, it was very difficult for Mr. Ng to climb up and down the bunk bed. Mr. Ng suspected that his back and leg injuries were worsened as a result of the lifting and climbing up and down the bed.

When Mr. Ng was prescribed medication, he was required to obtain his medication at a counter that was about 40 to 50 feet away from his cell. When Mr. Ng was unable to walk, he was still required to pick up the medication himself, and the detention facility refused to deliver medication to his cell. Eventually, Mr. Ng became bed-bound and began to experience difficulty even using the bathroom, which was located within his cell.

When housed in the J-2 section of the Wyatt Detention Facility, Mr. Ng had to ask other detainees to bring him food and help him use the bathroom. At one point, Mr. Ng was unable to take a shower or leave his cell five days in a row. Although Mr. Ng had repeatedly requested for a wheelchair, he was not given one.

Mr. Ng stated that he was transported to the hospital located outside of the facility on July 26, 2008 because an MRI scan had been scheduled. When he arrived there, Mr. Ng was told by the doctor that an MRI could not be performed that day because it was a Saturday. The doctor scheduled an MRI scan for the following Monday. However, no attempt was made to transport Mr. Ng to the hospital on that Monday.

As his condition worsened, Mr. Ng was moved to an isolation cell within the Health Services Unit (“HSU”). During this time, medication was brought only to the outside of his cell. The nurse who brought the medication asked Mr. Ng to come out to get his medication. Because Mr. Ng was unable to move, he was not able to walk to the door of his cell. As a result, he did not receive his medication for an extended period of time.

On Tuesday, July 29, the facility and/or agents of Immigration and Customs Enforcement (“ICE”) attempted to transport Mr. Ng to the hospital for a CT-scan and/or MRI. Mr. Ng reported, however, that he was not granted a wheelchair. Since Mr. Ng could not move without a wheelchair, he was unable to go to the hospital that morning.

In light of the repeated denial of medical care and use of a wheelchair, on July 29, 2008, undersigned counsel filed a Petition for Writ of Habeas Corpus in the U.S. District Court for the District of Rhode Island seeking Mr. Ng’s release (Docket No. 08-285-S). A copy of that petition, motion for a temporary restraining order and affidavits submitted in support of the petition are attached hereto.

On or about July 30, 2008, Mr. Ng was transported by force by ICE agents from the Wyatt Detention Facility to Hartford, Connecticut despite Mr. Ng’s complaints that he was in excruciating pain and unable to walk. Mr. Ng stated that, on this day, three guards of the Wyatt Detention Facility came into his cell in the early morning and put on his shoes in a very rough manner and caused him great pain. Two officers then placed a cane under Mr. Ng’s armpits, and used the cane to lift him off the ground. As Mr. Ng was being carried, his legs dragged on the ground and caused him extreme pain.

Mr. Ng stated that as he was brought to the waiting van with hands and legs in shackles, but not given a wheelchair. Instead, he was lifted off from the ground by five guards. During the process, Mr. Ng suffered additional pain, and was left with bruises on his arms and legs.

A witness confirmed Mr. Ng’s description of these events. In addition, an associate of undersigned counsel viewed massive bruises on Mr. Ng’s forearms and armpits the following day.

Mr. Ng also indicated that the guards were staging for the video recording. He said that the guards told a nurse that Mr. Ng was alright and gave him medication in front of the camera. At one point, Mr. Ng complained that his head was hurt and that he was experiencing great pain. One of the guards told him that it was no use complaining because the camera had been turned off. After Mr. Ng arrived at the ICE office in Hartford, he was put on a wheelchair. To this day, the purpose of the trip to Hartford remains unknown.

On July 31, 2008, a hearing on the motion for a temporary restraining order was held before District Judge William E. Smith. Only after this hearing was Mr. Ng provided a wheelchair and given a full examination by a medical doctor. It was then, on August 2, 2008, that Mr. Ng’s cancer and fracture of the spine were diagnosed. At this point, we were informed that his condition was terminal. Mr. Ng passed away just three days later.

This happened in 2008, in the United States of America.

[Ng was found to be suffering from] cancer in his liver, lungs and bones, and a fractured spine. “ ‘I don’t have much time to live,’ ” his sister said he told her in a call from Rhode Island Hospital in Providence.

She said the doctor warned that if the family came to visit, immigration authorities might transfer her brother. Three days passed before the warden approved a family visit, she said, after demanding their Social Security numbers. Late in the afternoon of Aug. 5, as Mr. Ng lay on a gurney, hours away from death and still under guard, she and his wife held up his sons, 3 and 1.

“Brother, don’t worry, don’t be afraid,” Ms. Zhao said, repeating her last words to him. “They are not going to send you back to the facility again. Brother, you are free now.” [Source.]

Dog lovers know as well as anyone that compassion isn't finite. I expect many of you [if you are Americans] have already contacted your legislators about the denial of medical treatment to detainees. If you haven't called or faxed your representatives yet, indulge me: it's my nation's soul I'm writing about now. The rights and freedoms our forefathers were willing to die in order to protect, are worth the fifteen minutes it will take to look up the names of a few legislators and let them know that what happened to Jason Ng is unjust, unconscionable, and in violation of every virtue our country claims to represent.

From the NY Times editorial:

Immigration officials keep insisting that detention care is adequate and getting better. But it will take far more than promises of more audits to build confidence in a system that allows people to suffer so grievously.

Immigrant advocates have long complained about the lack of due process for people who run afoul of the country’s convoluted immigration laws. But access to decent medical care is an even starker problem.

While reasonable minds can differ on some aspects of the immigration debate, protecting the health of detainees is not one of them. Allowing sick people to suffer and die in custody without adequate treatment is unacceptable and violates the most fundamental standards of American law and decency. The system must be fixed.

Call or fax your legislators, if you haven't already. Thanks.
Posted by Luisa at 5:24 PM

this story brought tears to my eyes...how sad it is a man would be treated like this. i came across this during my effort to investige wyatt due to one of my family members being held @ wyatt and getting brutedly abused by another inmate my thoughts and prayers go out to the family