Wildfires at home and abroad 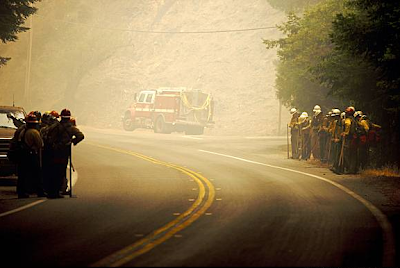 Waiting for the flames: firefighters prepare to make a stand in Big Sur. SF Chronicle photo by Kurt Rogers.
How brave do you have to be, and how good at what you do, and how much faith must you have in your plan, your equipment and your colleagues, to stand on a narrow road in the middle of a tinder-dry forest and try to stop a firestorm from jumping that road? It seems impossible, but I've driven on roads where it's been done. I heart wildland firefighters.

I live in a region that is supposed to burn — that's the way the chaparral ecosystem works. Mike Davis's essay Let Malibu Burn: A political history of the Fire Coast is a classic read on the consequences of residential development in the fire ecology of Southern California. Written in 1996, it seems prescient now.

This past week the L.A. Times ran a five-part series, Big Burn, about the growth and cost of wildfires in the West. The surprise of this series, for me, was learning about the role of homeowners in wildfire management in Australia:

It was brutally hot, 108 degrees, and the wind was howling. Bushfires were raging in the hills, making their way inexorably toward the Baker farmstead at the foot of the Brisbane Ranges.

John and Carlene Baker had moved here to get away from the hurly-burly of the city. They lived with their two children and a cast of orphaned animals on a 60-acre spread they called Foxford.

Now, all of it was threatened. Embers were falling around the house. The animals were growing restless. The Baker property sits deep in a box canyon, a mile from the main road. The couple knew there was little or no chance firefighters would reach them.

Southern Californians might respond to such a predicament by packing the car and evacuating. The thought never entered the Bakers' minds. Instead, they did what they had been trained to do: stay and fight.

Fire is a pervasive danger in Australia, just as in much of the American West. But Australians cope with the threat in a manner difficult to envision in the U.S.

Americans expect firefighters to protect their lives and property. Australians in rural communities view that as their own responsibility.

U.S. authorities are quick to order mass evacuations during wildfires; they prefer to get civilians out of the way so professionals can douse the flames. Australian officials are more likely to hand homeowners shovels and put them to work.

People here live by the principle of "stay or go" during fire season. Residents who can't or won't battle an advancing fire are advised to get out early. Those who stay are expected to defend their homes. It's a policy driven by pragmatism: There simply aren't enough firefighters or firetrucks to protect far-flung rural homesteads.

The "stay or go" policy, adopted state by state beginning in the mid-1990s, has sharply reduced losses of life and property in wildfires, statistics show. In 1983, a year of widespread conflagrations, 60 Australians lost their lives in bushfires, not including firefighters, researcher Katharine Haynes reported. In the equally severe fire season of 2003, bushfires caused just six deaths.

The "stay or go" approach so far has found little acceptance in the United States. But as wildfires become more severe and costlier to fight, some U.S. officials say the Australian model deserves a serious look.

"We need to push this concept and push it hard," said Bodie Shaw, wildland fire director for the U.S. Bureau of Indian Affairs, which fights fires on reservations and other public lands. "The onus and responsibility need to shift to you as a property owner."

In Australia, sheltering at home does not mean simply waiting the fire out. It means confronting the menace with hose, mop and shovel.

"Let's be honest: It is scary," said John Valcich, captain of a volunteer fire brigade in the rural community of Mansfield. "We're not telling you that you have to stay. But [if you leave] you will lose your house. And don't blame anyone. What's it like to stay? It's like standing at the back of a jet plane when it's revving up. I try to tell people what to expect. But it comes as a hell of a shock when it hits."

Big Burn was written by Bettina Boxall and Julie Cart. Excerpts above are by Julie Cart, from the fifth article in the series. "Residents in the path of bushfires are told to evacuate early or stay and fight. A family that chose to stick one out endured a frightening test of endurance and determination." No kidding. A good read — check it out.
Posted by Luisa at 12:33 AM

It is good to see some of the reactions in the Northern Hemisphere to how we "downunder" live with our "bushfires". I live in the Mt Lofty Ranges, near Adelaide in South Australia. My bushfire plan hinges on my decision to "stay and defend" in the event of a bushfire. I have done a full risk assessment of my property and circumstances. My plan is written up with headings of prevention, preparation, response and recovery. I have purchased fire PPE, have a series of pumps linked to several water tanks for a range of fixed sprinkler and hose systems. Why? I have spent 20 years as a police office, been involved with busfire response planning and know that we, and the firies, can not be at every home. Unfortunately not every resident in rural areas is like this. I know that I will be on my own when the big fire comes, and the only way to go is plan, be prepared and don't rely on the government. I woudnt be surprised if some states of the USA start to go down this path. Good luck! John McMahon, South Australia.

John, thanks for writing! The L.A. Times article -- and your comment -- have made me very interested in Australia's "stay or go" approach, especially since our family has a mountain cabin.

I found photos of the Mt. Lofty Ranges on Flickr -- that's some beautiful, rugged country you live in.