Websites to watch during a season of great sheepdog trials 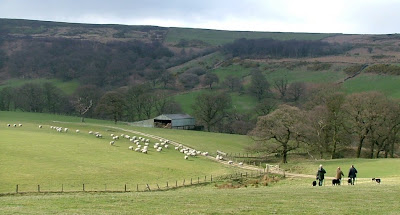 Before the gather. Photo from the English National Sheepdog Trials website.
For an ultimate insider's look at some of the great trials in North America, check out guest blogger Bev Lambert's updates over at Sheepdog News. Bev won't need any introduction to sheepdog folks. She's handled her border collies to multiple wins at Soldier Hollow and Meeker and will be blogging from both of those challenging, prestigious trials, and from the National Finals, where her dogs Lark and the legendary Pippa were Reserve Champions [Lark in 1997, Pippa in 2002 and 2006].

Over in the UK the English, Irish and Scottish Nationals are done and the Welsh National is yet to come, along with the International and the World Trial [both in Wales this year]. The Kinloch Sheepdogs website has news updates, a blog, photos of dogs at work, trials results and quite a bit more. Kelvin Broad and Angie Driscoll are the humans of Kinloch Sheepdogs, and their website is one to keep an eye on — they're in Wales, in the midst of things.

Represent...! The young dog that placed fifth at the English Nationals, Derek Scrimgeour's Fleece, was bred right here in beautiful California by Dan and Geri Byrne. Geri is a top handler, a tireless advocate for the working sheepdog, and one of the organizers of the 2009 USBCHA National Sheepdog Finals. Yay Fleece!!
Posted by Luisa at 11:44 PM