Olympics in China: Colors I love 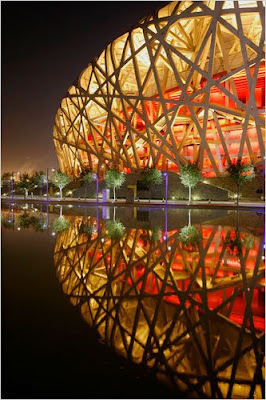 National Stadium in Beijing, designed by Swiss architects Jacques Herzog and Pierre de Meuron. Photo by Claro Cortes IV for Reuters.
Expect to be overwhelmed, writes Nicolai Ouroussoff in the NY Times architecture review of the stadium nicknamed the Bird's Nest. The stadium "has an intoxicating beauty that lingers in the imagination":

Great architecture can never be fully conveyed through a television screen, of course, and it saddens me that so many Americans will experience the building only via satellite[...] However the structure attests to China’s nationalistic ambitions, it is also an aesthetic triumph that should cement the nation’s reputation as a place where bold, creative gambles are unfolding every day.

My homie James Fallows is living in China and following the events in Beijing — Andrew Sullivan writes, "I'd bookmark Jim now if I were you if you want the best take on the Olympics." From today's post, Innocents Abroad:

Before coming here two years ago, I had been a pretty serious runner for many decades in the past. Never broke three hours in the Boston or Marine Corps marathons, but came close. (3:02, but who's counting.) Once insanely took part in a 24-hour relay marathon, in which teams of ten people took turns running a mile each on a track, around the clock -- and our goal was to average under 5:15 per mile over the whole period, though that was long ago.

Yet I have not found it sensible to run outside, even one time, in Shanghai or Beijing. Of course there were days when I could have done so. But on average??? That's what the indoor gym is for, with its illusion of filtered air.

Good luck to the NYT running team, and to the Olympics as a whole. And may America preserve the good parts of its touching "how bad can it be?" creed.

Read all of this most excellent post here.
Posted by Luisa at 4:46 PM