Planet of the apes: [non-human] primates in the news 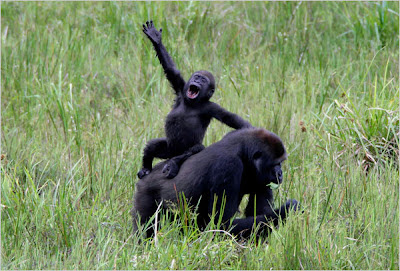 Yay us!
The good news is that there are a whole lot more lowland gorillas than we thought. The bad news is that other non-human primates are disappearing fast.

The new census tallied more than 125,000 western gorillas in two adjacent areas in the northern part of the country, covering an area of 18,000 square miles (47,000 square kilometers). Previous estimates from the 1980s placed the entire population of western lowland gorillas, which occur in seven Central African nations, at fewer than 100,000. Since then, however, scientists had believed that this number had dwindled by at least half, due to hunting and disease. [Link.]

The NY Times has a related article and photo gallery here.

Meanwhile, 48% of primate species are in deep trouble.

A global review of the world's primates says 48% of species face extinction, an outlook described as "depressing" by conservationists.

The IUCN Red List of Threatened Species says the main threat is habitat loss, primarily through the burning and clearing of tropical forests.

More than 70% of primates in Asia are now listed as Endangered, it adds.

The findings form part of the most detailed survey of the Earth's mammals, which will be published in October.

Nation with the highest percentage of threatened species: Cambodia, with a whopping 90%.

"In many places, primates are quite literally being eaten to extinction," he warned.

"Tropical forest destruction has always been the main cause, but now it appears that hunting is just as serious a threat in some areas, even where the habitat is still quite intact."

Quotes are from the BBC's good report — read it here.
Posted by Luisa at 5:29 PM