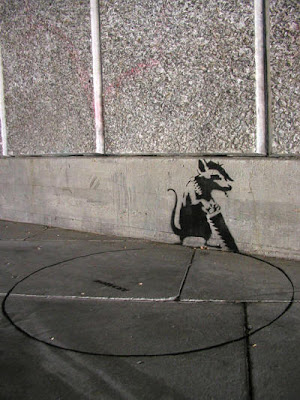 Resistance is futile. [Rat by Banksy.]
I don't care what Fosher says, it's time to jump on the panic button with both feet. Non-human animals are plotting against us, OMG! "It's almost any species," warns the Telegram: "Some menacing change has come over them." OMG, I am seriously worried about this. My odds of surviving a zombie apocalypse [warning: link goes to zombie meet-up site] are just 42% — I don't stand a chance against actual, live border collies and crows and mountain lions, not to mention small rodents with tools and a grievance, OMG.

This disquieting pattern has only recently been detected, in part because it is so disparate and weird. But it's now widely accepted that the relationship between humans and animals is changing. One of the world's leading ethologists (specialists in animal behaviour) believes that a critical point has been crossed and animals are beginning to snap back. After centuries of being eaten, evicted, subjected to vivisection, killed for fun, worn as hats and made to ride bicycles in circuses, something is causing them to turn on us. And it is being taken seriously enough by scientists that it has earned its own acronym: HAC - 'human-animal conflict'.

It's happening everywhere. Authorities in America and Canada are alarmed at the increase in attacks on humans by mountain lions, cougars, foxes and wolves. Romania and Colombia have seen a rise in bear maulings. In Mexico, in just the past few months, there's been a spate of deadly shark attacks with the L.A. Times reporting that, 'the worldwide rate in recent years is double the average of the previous 50'.

"The numbers are disturbing enough, but the menacing changes in behaviour are especially worrying to scientists," the article continues. "[S]cientists have concluded that revenge for our myriad barbarities could indeed be a motive." Which certainly explains the vicious ant-bite I received up at the cabin last weekend, the ongoing battle with mosquitoes, etc. They've joined forces against us, and who can blame them, really?

Stories like these remind us that there are millions of beasts armed with teeth and stingers, who can out-sniff, out-run, out-fly, out-fight and out-bite every one of us. The eerie truth is that, right now, we're surrounded.

Our only hope is that further exposure to human culture will weaken their resolve, and they will decide to keep some of us alive for the sake of the service economy. "We shouldn't be surprised when animals play nasty" — and thanks to the Telegraph, I, for one, won't turn my back on a large anthill again.
Posted by Luisa at 10:00 PM

If that prairie dog (or whatever it is) keeps eating McDonald's, pretty soon he'll be as fat and lethargic as all of us and will pose no threat. He'll probably die of bubonic plague anyway.

You don't suppose that this could be related to the fact that the world is increasingly filled with ignorant maroons who think bears and moose want to be petted and hand fed and believe that all the sweeet widdle aminals just wuv us all? [gagging]

Regardless, the furry goons had better not mess with me, I stand a 74% chance of surviving a zombie apocalypse (must be the guns and previous HAZMAT response background!)

Well, Janeen, if we don't put out food for the coyotes, what will they eat? Bunny rabbits! And some of us are not comfortable with the blood of baby bunnies on our hands.

[True story: A suburbanite told a SoCal reporter, "We feed the coyotes so they won't have to kill other animals."]

Darn -- all those West Virginia hillbilly relatives that taught me to shoot and I only got a 65% chance of surviving the zombie apocalpse.

I'm moving to MN with Janeen as soon as her house gets finished -- Appalachian self-reliance obviously has fallen apart since the 19th century! :-(