Midnight blogging frenzy, with an update on that giant inflatable poo 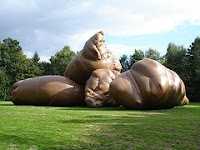 Remarkably, the giant poo story has nothing to do with California's AB 1634, the forced spay/neuter bill, but more about that shit later — first, the craptastic news from Washington. Just when you think they can't possibly screw things up much more than they already have:

The Bush administration is proposing to let federal agencies decide for themselves whether highways, dams, mines and other construction projects might harm endangered animals and plants, according to a draft of planned rule changes obtained by The Associated Press.

The proposed regulations, which do not require the approval of Congress, would reduce the mandatory, independent reviews that government scientists have been performing for 35 years.

Big hat tip to the most excellent Birdchick — and as Sharon says, it's no time for apathy. This proposal goes beyond stupid and beyond greedy and is barreling towards evil at a speed exponentially greater than that of a giant inflatable turd. Call your people in Washington and raise hell.

Nathan Winograd has written about the stench in Los Angeles, where Ed Boks and Judy Mancuso first put their heads together and came up with the disastrous AB 1634. Back on August 5 the Unleashed blog reported on "Workshops to explore "no-kill" policy at L.A. animal shelters":

The Los Angeles Department of Animal Services on Wednesday evening is holding the first of 11 scheduled workshops to look at how the city shelters can achieve a "no kill" policy. All meetings are open to the public.

Every municipal animal shelter wants to arrive at a "no-kill" policy. Essentially, that means that no healthy animals -- like the young pooches pictured above in the city's South L.A. shelter in January -- will be euthanized for lack of space. Being able to do that is a challenge.

The Humane L.A. Workshops will look at what is being done and what could be done better. "We want to get input from stakeholders in our community," says Animal Services general manager Ed Boks, who will attend the Wednesday workshop.

Depressing to think of the animals that might have been saved if Boks and Mancuso hadn't been so busy promoting the spectacularly divisive, impossible to enforce, medically risky and profoundly dishonest "Healthy Pets" Act. The rewritten version is nasty, brutish and short: there is no due process, no appeals process, anonymous complaints are accepted and there are no exemptions. No exemptions for working dogs. No exemptions for dogs whose health would be at risk. Three anonymous, unproven complaints and your dog is toast.

Forced spay-neuter kills more pets. That may seem counter-intuitive to many, but that’s the reality.

But much as I don’t want more pets to die as an unintended consequence of a piece of sound-bite legislation — and they have and will, everywhere these bills pass — I really don’t want what Lloyd Levine represents now to be what our government is all about.

Which is why as an an animal-lover and a citizen I’ll be calling and faxing today.

It's heartening to see that even the great Caveat up in Canada is spreading the word, as if she weren't busy enough fighting stupid Canadian politicians. All we can do is write the truth, and hope that enough people give veterinarians and other authentic experts more credence than they give a retired game-show host.

In other news: it isn't everyday that you see a headline in the Telegraph with the words "giant inflatable turd," or a story that begins, "A house-sized dog poo has wreaked havoc after a storm picked it up," or a jibe about "American cultural imperialists busy spreading their crap culture" etc, etc. A really big hat tip to Moira at Dog Art Today for the scoop. ["Scoop"! OMG, I kill me.] Photo from Flickr.
Posted by Luisa at 12:26 AM

Hey, thanks for the shout-out, Luisa! I'm not great, but I hope I'm annoying :>)

The way I see it, we're all in this together.

As for the big piece of crap, I would SO love to drop that on the lawn at Queen's Park (Ontario's provincial legislature). Hmmm...maybe it's time for BIFF to strike again...