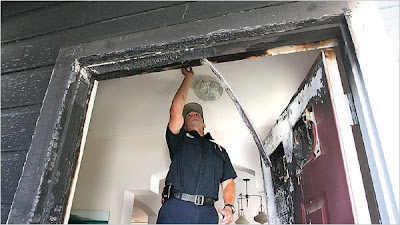 "Antiscience violence," the University of California calls it. "Domestic terrorism," says the FBI. Several days after his name appeared on an apparent hit list of "animal abusing" scientists, UC Santa Cruz biologist David Feldheim was awakened by the blast of a firebomb. The device exploded on his front porch at 5:40 Saturday morning. Above, firefighter Cody Muhly checks the damage. [Photo from the NY Times.]

Fliers identifying 13 UCSC scientists, some of whom use mice, fruit flies and other nonprimate creatures in their research, were discovered at Caffe Pergolesi on Tuesday. The fliers say, "Animal abusers everywhere beware; we know where you live; we know where you work; we will never back down until you end your abuse."

The names, home addresses, home phone numbers and photos of researchers were published on the fliers.

The firebomb at the Feldheim residence melted the front door frame and filled the house with smoke. Dr. Feldheim, his wife and their two children escaped on a fire ladder from a second-story window. A car belonging to a second UC researcher was blown up on campus at the same time the Feldheim home was attacked. FBI officials are expected to take over the case today.

While a spokesman said he didn't know who committed the act, the Woodland Hills-based Animal Liberation Front called the attacks a "necessary" act, just like those who fought against civil rights injustices. Spokesman Dr. Jerry Vlasak showed no remorse for the family or children who were targeted.

"If their father is willing to continue risking his livelihood in order to continue chopping up animals in a laboratory then his children are old enough to recognize the consequences,'' said Vlasak, a former animal researcher who is now a [non-practicing] trauma surgeon. "This guy knows what he is doing. He knows that every day that he goes into the laboratory and hurts animals that it is unreasonable not to expect consequences."

Clark, the Santa Cruz police captain, said it was "unconscionable'' for anyone to defend such acts: "To put this on par with any of the human rights issues is an absolute insult to the integrity of the people who fought and went through the human rights movement. This is what people do when they have an inability to articulate their point in any constructive way. They resort to primal acts of violence. Any reasonable person would need a logic transplant to begin to understand this level of degraded thinking."

Brian Israel, a UCSC senior pursuing a legal studies degree, lives a block from Village Circle on Moore Street. The 21-year-old checked out his neighbor's house Sunday. He called the attacks "hypocritical."

"If you're against killing animals, but you're trying to kill humans, there's no logic to it," Israel said. "It doesn't make sense to hurt people. I'm just thankful no one got hurt."

"Just like those who fought against civil rights injustices"? To paraphrase the great Yogi Berra: If Dr. Martin Luther King, Jr. were alive today, he'd be spinning in his grave. Read the rest in the San Jose Mercury News.
Posted by Luisa at 12:32 AM