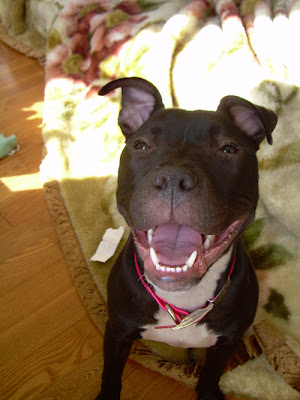 The move took guts and it took integrity: BAD RAP, an early supporter of AB 1634, now opposes the bill.

On Friday, June 28, the directors of BAD RAP faxed legislators to announce that they no longer support AB 1634 and will oppose the bill rather than adopt a neutral position. They asked the author campaign manager to remove the BAD RAP logo from the bill's official website. And I actually cried when I got the news, because BAD RAP and the dogs they love are so worthy, and deserve so much better than this useless, punitive legislation.
I can't say enough about BAD RAP --- they've been the #1 pit bull link in my sidebar since this blog began. They are known and respected across the country for their innovative programs, their informed defense of a maligned breed and their tireless efforts on behalf of shelter dogs. Did it kill me that they supported a bill I hated?

I was plenty steamed --- but BAD RAP stayed in the sidebar.

Pit bulls and pit bull mixes make up the vast majority of dogs euthanized in California shelters. I know this, because unlike most of the AB 1634 supporters wringing their hands over the fate of shelter animals, I actually have two pit bulls, both adopted from the local pound.
Here's heartbreaking for you: day after day, BAD RAP members look into the faces of shelter pit bulls with glorious temperaments --- and turn away in tears because there aren't enough foster homes, there aren't enough adopters, and scads of irresponsible, unscrupulous jerks continue to breed their pit bulls non-stop, litter after unwanted, homeless, impounded litter.

If anybody could have been excused for supporting AB 1634, it was BAD RAP.

And for sheer integrity, consider that BAD RAP cared enough about other dogs to lobby publicly for a stockdog exemption, and urge the inclusion of sensible language supporting the ethical standards of responsible breeders. The common-sense revisions suggested by BAD RAP would have eliminated the backyard breeder who is breeding for profit, barred puppy mills, and protected working stockdogs which, in some cases, are neither registered nor trialed.
Instead we got the AB 1634 revisions made public on June 27: designed to eliminate the most responsible owners and breeders in the state. Designed to protect puppy mills and pet stores. Designed to be an evasive, confusing mess.
AB 1634 won’t cause a single pit bull to be adopted from a California shelter. It won't stop unscrupulous breeders from producing more litters of unwanted pit bulls. It won’t stop owners from relinquishing their dogs due to a move, a new baby, or too much barking. It won’t make dogs healthier, and it won’t save money. It is a frightening, deeply offensive government intrusion into the lives of responsible, law-abiding citizens and their companion animals.
And now BAD RAP has joined the opposition. Want to show your appreciation? Hint: they take PayPal. [And no, I am not affiliated with BAD RAP in any way.]
Posted by Luisa at 12:56 AM