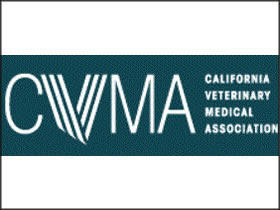 Dammit, I thought I had a scoop. Read all about it! I coulda been a contenda.
Yeah, the CVMA thing. Huge news of the day. Gina over at Pet Connection was first, and with a great post, too, dammit, dammit, dammit. I have to get one of those new fangled cell thingys so I can blog from anywhere.
Dammit.
I was in Senator Negrete McLeod's office when I got the news. I'd just finished talking to the senator's rep when a pleasant man walked in sporting a "No on AB 1634" button.
"I got word right after I pulled into the parking lot," he said.
High fives all around.
We chatted for a minute and then I jumped in my truck and headed home, roaring down the freeway and writing the post in my head: CVMA! Rescinds! Support! Lassie, Get Help scoops the world! And it was a hot day so I had to drive by the farm to check on the sheep, and by the time I got to a computer, well... as they say, it was all history.
The senator's rep was an intelligent, friendly, courteous person. Patient and helpful, too, even though we both knew I wasn't a constituent. The rep has three dogs, all adopted from a local shelter.
The rep had never heard of puppy mills.
I forget, sometimes, just how vast the gulf is between people who love dogs and people who are dog people. Dog people search PubMed for abstracts on immune mediated hemolytic anemia, know who belongs to the local raw food group, and can explain why dogs with excellent hips can produce a dysplastic pup. Dog people read up on epilepsy, vaccines and tick-borne diseases and know how old a dog has to be to get an OFA hip score.

Real dog people have opinions on OFA and PennHIP, vaccines vs. rattlesnake-proofing and AKC vs. working breeds.

Dog people know that you don't make a working dog work, you make him stop [and I wish I knew who to credit for that quote --- they say short-term memory is the first to go]. Dog people know that a responsible breeder will take back any dog she's bred, at any time, for any reason, and real dog people know that responsible breeders have been writing this promise into puppy contracts for decades.
Which brings me to Patt Morrison of the L.A. Times.
Patt, I've been a fan forever. You are a smart, brave, big-hearted woman, and I love you for looking out for lost and unloved dogs. But your take on AB 1634 was a huge disappointment.
Reporters are supposed to be demons for research and crusaders for truth, and that may be a joke for many but I never thought it would be a joke for you. You haven't read the bill, Patt. You don't know enough about dogs to understand why people like me oppose it, and you couldn't take the trouble to find out.
Pity, because if AB 1634 passes, the shelter situation is going to get a lot worse.
You rail about "all those backyard puppy mills churning out defective Dalmatians or border collies or whatever purse-sized dog happens to be hot. My vet took in an abandoned puppy-mill Chihuahua — Scooter, born without front legs because of overbreeding."
AB 1634 sanctions all that. Puppy mills get a free pass. Any chucklehead willing to jump through the hoops will be able breed his dog, and it doesn't have to be a temperamentally sound dog or even a particularly healthy one. (We know there won't be any hip dysplasia screening.) Inbreeding? No problem! And California pet stores will go right on selling misery puppies born by the hundreds of thousands in Midwest puppy mills.
This store just opened not far from me. Are you cool with that? AB 1634 is.
You wrote,

I'm one of those who cleans up your messes. Every dog I've rescued and found a home for is one you flicked aside like an empty Arrowhead bottle [...] I'm tired of cleaning up after you. California is tired too; its cities and counties have no room or money to keep all the homeless kittens and puppies, all the old dogs and cats you allow to overbreed or leave out on the street like an old refrigerator. And so they have to kill them.

Patt. This bill won't stop a single Californian from relinquishing a dog because "we're moving" or "he barks" or "I'm having a baby." And the mouth-breathing dropout who chains his poor pit bull bitch in the garage and breeds her on every heat is not an L.A. Times reader.
That dropout doesn't know AB 1634 exists. He doesn't license or vacccinate his dogs now, and he won't get them neutered if this bill passes. The dogs he produces --- pit bulls and pit bull mixes --- make up 80% or more of the dogs in some California shelters and the great majority of dogs euthanized in the state. Last year in L.A., 39% of the dogs euthanized were pit bulls or pit mixes. (Those rescue organizations you support? Not a pit bull in sight.)
Bay Area and OC rescues make regular runs to the Central Valley in search of non-pits for people to adopt back home. Some people like to say that 25% of the dogs in our shelters are purebreds, but what they don't say is that most of those purebreds are pit bulls.
Patt, I know all this because unlike the great majority of people wringing their hands over the plight of shelter animals, I have a pit bull. In fact, I have two --- both adopted from the local pound. I've supported pit bull rescue for twenty years.
AB 1634 won't make a single Californian adopt a pit bull. (Have you adopted one? Thousands of wonderful pit bulls need good homes.) AB 1634 will encourage -- no, it will mandate -- careless breeding. It will not make dogs healthier. It will not save the state a cent.
What AB1634 will do is sanction "just one litter;" force many law-abiding Californians to neuter their dogs before it is best for the animal; allow puppy mills and pet shops to flourish; and create such a burden of veterinary paperwork, criminal background checks, home inspections and record-keeping that our already overworked and underpaid ACOs will have no time left to play testicle police.
You write: "The objections to Levine's bill run from the selfish to the ridiculous."
Not if you've read the bill, Patt. Not if you've read the bill.
Posted by Luisa at 12:06 AM