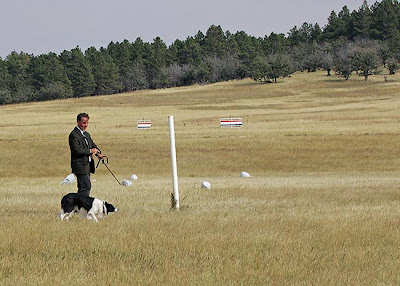 Pearse Ward and his great dog Riel in the double lift final of the 2005 USBCHA National Sheepdog Championship. The latest revision of AB 1634 will not protect stockdogs like Riel whose owners do not keep livestock on their own property. [Photo by Denise Wall, used with permission.]

The train wreck that is AB 1634 just gets worse and worse. The latest revision is up, and stockdogs are finally -- badly -- addressed. It's painfully obvious that the authors of this bill 1) know next to nothing about dogs and 2) know absolutely nothing about agriculture. Under "Article 3. Permits":

(6) The dog is used for herding or guarding livestock, and the dog's owner resides on or is the owner of property designated for agricultural use.

This new language won't protect my working border collies: my sheep are kept on a twenty-acre farm ten minutes from my home, and I don't own the farm.

It wouldn't protect the good dogs owned by the commercial sheepman who gave me my first ewes --- he ran his thousands of ewes on government land. God forbid his dogs should foul the gene pool.
It won't protect the flockmaster's dogs at ag schools like Cal Poly: the flockmaster oversees cattle, sheep and hogs, and the last time I checked, her job description required her to bring two stockdogs to work each day. (If the flockmaster lives in an apartment, does that mean her good border collies don't deserve to be bred?)

I'm not sure AB 1634 would exempt Bill Fosher's dogs ... and he runs the best sheep forum on the web. Good thing Bill lives in New Hampshire.
As always, puppy mills and pet shops get a free pass.

Have a safe and happy Fourth! And Californians, you are now free to keep your great stockdogs and LGDs intact --- all you have to do is buy a ranch.
Posted by Luisa at 3:44 PM