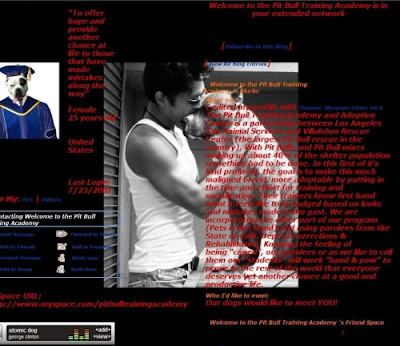 Two years ago BAD RAP partnered with the East Bay SPCA to give us the trailblazing Pit Bull Hall, and now Los Angeles Animal Services and Villalobos Rescue Center have joined forces to create the new Pit Bull Training Academy and Adoption Center, celebrating its Grand Opening on August 4th.

The Pit Bull Training Academy will be located in the old South Los Angeles Annex Shelter on West 36th St., and organizers plan to move as many of L.A.'s impounded pit bulls as possible to the new location for socialization, training and adoption.

Directing the program will be Tia Maria Torres, named one of the city's most interesting people by L.A. Weekly in May. Torres is no upstart when it comes to pit bull rescue and training programs: in addition to running the Villalobos Rescue Center, she's been offering "pit bulls only" training classes at L.A. shelters for years. Under her guidance both the dogs and their future caretakers will be groomed for their new roles as model canine citizens and informed, responsible owners. (The Pit Bull Training Academy even has a MySpace page. Dude...!)

Pit bulls make up nearly half of all dogs impounded in Los Angeles, and last year 41% of all dogs euthanized in L.A. were pit bulls, according to LAAS general manager Ed Boks. Torres has pointed out that impounded pit bulls are often kenneled alone due to dog-aggressive behavior, and bringing them to the South Los Angeles Annex Shelter will make more space available for other dogs in the shelter population.