Bryant: "Mark my words, Ontario will be safer" 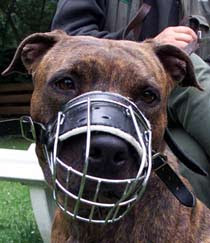 Ignorance, hysteria and urban legend are terrible grounds for legislation. Want proof? Take a look at AB 1634 Attorney General Michael Bryant of Ontario, Canada. Bryant yields to no one when it comes to ignorance and hysteria. He wanted a pit bull ban for the province, and he got one: Ontario banned the ownership of pit bulls in 2005.
CBC News reported:

The legislation prevents people from acquiring a number of breeds of dogs classified as pit bulls, and requires those who already own the dogs to neuter and muzzle their animals.

There had been a number of highly-publicized attacks, but never any pit bull-related fatalities in the province of Ontario.
Banning the breed might give people a false sense of security, worried Sheila McDonald, director of the Canadian Federation of Humane Societies. "There are other breeds that have been involved in dog incidents [...] [One] huge thing that is extremely lacking in Canada is a database of dog bite incidents. And that has been recommended at several inquests into fatal dog attacks and has never been followed up on."
Nonsense, said Bryant. "Mark my words, Ontario will be safer."
Anyone who knows anything about dogs could have predicted what would happen next:

A 17-month-old girl is dead after being mauled by her grandparents' dog near Ottawa on Canada Day.

Police say the Korie-Lyn Edwards was visiting her grandparents in Montague Township when their 10-year-old Rottweiler-German shepherd mix attacked her.

"Basically the girl had just wandered where the dog was tied up. The dog had no history of biting, socialized with adults and children, so this is obviously just a tragic circumstance," said Const. Paige Whiting of the Ontario Provincial Police on Monday.

Edwards suffered severe head injuries. The girl's parents rushed her to the local hospital and she was later airlifted to the children's hospital in Ottawa, where she died.

The dog has been turned over to Lanark County animal control officials and is expected to be euthanized at the family's request.

"It's just a wake up call for most dog owners that even pets, we have to be vigilant especially around small children, they can be very unpredictable," Whiting said.

An autopsy will be performed in the next few days. Police don't expect to lay charges.

Michael Bryant bears a measure of responsibility for this child's death. When someone in a position of authority insists that there are "safe" breeds and "dangerous" breeds, and encourages people to believe that their responsibility for preventing dog bites begins and ends with the selection of a "safe" breed, he is lying to the public, and he is putting children, in particular, at risk of serious injury.
For more about Bryant, pit bulls, generalizations and stereotypes, see Malcolm Gladwell's article Troublemakers: what pit bulls can teach us about profiling. Link in the sidebar --- it's a classic.
Posted by Luisa at 9:04 AM

Michael Bryant is a dangerous individual. He wouldn't admit he was wrong after the public hearings, where every accredited dog expert and many dog owners voiced opposition to his law. He insisted on going ahead, knowing full well he was wrong.

In Ontario, since the ban was enacted, bites have increased (by more than 60% in some munis), fatalities have remained stable at roughly one per year and bylaw enforcement is impotent, as it has been for years.

Michael Bryant is a perfidious poltroon of the first order. He had no hesitation in legislating tens of thousands of dog owners into second-class status based on lies, media dis- and misreporting and fiction presented as fact.

Luckily, we'll be voting him out of office on October 10.

"Ontario will be safer," cont.:

The problem is most people don't know dogs. The number one cause of death by dog is a dog that is tied up. According to Karen Delise author of fatal dog attacks, because tethered dogs are stressed, since their option of flight is prohibited by the rope/chain it's only option is to fight. This child came into its territory, this child was not a memeber of it's pack. This dog did what many dog would do or have done. There are many articles written on this subject. If people knew more about dogs they wouldnt waste so much time discussing breed and would instead look at behaviour and all these misfortunes could be avoided.
PS Michael Bryant's fear mongering under the guise of public safety is disgusting and irresponsible. The truth always comes out in the end. I can't wait for the day everyone see's what he's all about.

"I can't wait for the day everyone see's what he's all about."
I think you may just have gotten your wish this week.