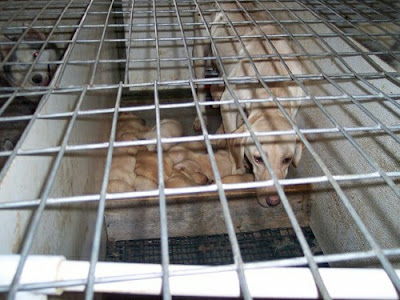 The latest revision of Lloyd and Judie's box o' crazy that mandatory spay/neuter bill is up, and I'd laugh if it weren't so completely insane.
Needless to say, there is no hint of protection, let alone an exemption, for the state's working stockdogs and livestock guardian dogs. One well-meaning soul on a breed rescue forum wrote to the AB 1634 "Coalition" to express her concern about the newly revised bill [she'd been collecting signatures in support] and was told that "Judie is a little hard to influence in this area due to her east coast urban outlook."

East coast urban outlook is my new favorite euphemism for "animal-rights craziness." It's painfully clear by now that the bill's author campaign coordinator is 1) determined to hurt people who raise livestock, and 2) happy to eliminate several of the world's greatest breeds of working dogs in the process. No-Birth nation, indeed.

But this revision lets anyone breed a litter, right?
Sort of.
If you are a rancher with a promising but unregistered border collie, say, AB 1634 will now allow you to obtain an intact permit and breed your dog. Once. Before she is two years old. Forget minor details like OFA ratings [the OFA won't certify hips or elbows until a dog is at least two], and forget being able to determine whether your young dog is actually, you know, worthy of being bred. (Border collies generally don't run in USBCHA Open classes until they are three or four.)

Your beleaguered animal control officers, already overworked and underpaid, will need to run a criminal background check on you before your dog can qualify for an intact permit. The ACOs will also need to get paperwork from your vet and inspect your home to make sure your animals are well cared for. You must give away, not sell, the puppies. After one litter, your dog must be spayed.

And here's the kicker: while AB 1634 is busy compelling law-abiding, responsible dog owners to jump through these byzantine hoops under threat of fines or worse, pet stores and puppy mills will be unaffected.

You know where pet stores get their puppies, right?

AB 1634 won't touch puppy millers. Large-volume commercial breeders have their business licenses and their state and federal tax numbers, just as AB 1634 specifies. Puppy millers don't worry about sound temperaments, good hips, congenital deafness, allergies or heart defects. Their dogs receive no health checks. The golden retriever bitches and dachshund bitches and all the others live in cages barely big enough for them to turn around in, and they are bred on every heat until their bodies give out.

From a NY Times article:

The dim, 4,300-square-foot building housed about 400 dogs, most of them puppies, in 120 elevated cages. It is one of three whelping houses at the Puppy Haven Kennel, the 1,600-dog compound that Havens has built up over the last 30 years in the outlands north of Madison, Wis. Nearby, an affable elderly couple hosed feces from slats below the cages [...] Recent U.S.D.A. inspection reports show many incidences of dogs kept with inadequate bedding in near-freezing temperatures at Puppy Haven or with excessively matted hair or insufficient veterinary care. Havens retired 75 adult dogs, no longer useful to him as sires or dams, to the Wisconsin Humane Society over the last year. According to the humane society, many of the dogs had to be treated for debilitating fears of noise or people before they could be adopted.

AB 1634 says you can open as many pet stores as you like, and sell as many misery puppies as you like and charge whatever you want for them. No carefully-screened waiting lists for these pups --- they're sold, at ridiculously high prices, to anyone with a credit card.
Well done, Lloyd Levine and Judie Mancuso! Thanks to AB 1634, pet shops and puppy millers will be laughing all the way to the bank.
Posted by Luisa at 9:37 PM