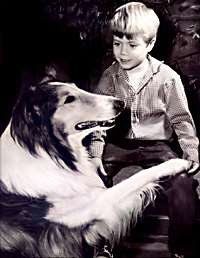 "I think Lassie's trying to tell us something...what is it, girl?"
Lassie to the rescue! And an oddly familiar title over at the Pet Connection blog ;~)
In other news, is there any proof at all, anywhere, that mandatory spay/neuter legislation has lowered animal control budgets? Not in Santa Cruz, apparently.
Views from both sides [PetPAC, Bob Barker] here.
Barker:

Rhode Island's law affects cats only. San Bernardino County's law is months old. The Stanislaus law is new as well. Mandatory spay/neuter has a very brief, spotty track record. And Santa Cruz? It may help to remember that their law bears no resemblance to AB 1634, and what works in Santa Cruz may not work in Kern County.
As USA Today points out, the nation's most successful spay/neuter programs are all voluntary.
Posted by Luisa at 4:30 AM