Counting my sheep before they're judged, and other news 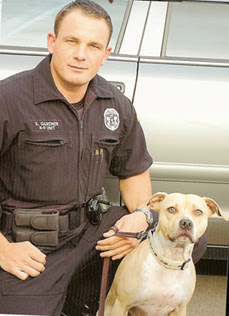 "We don't racially profile out on the roads, nor do we do that with our dogs. We don't care what type of breed the dogs are." Trooper Steve Gardner and K9 Brei. Trooper Gardner is a head trainer with the Washington State Patrol -- Brei, a pit bull, is his Narcotics Detection dog.

From the American Cheviot Sheep Society:

Cheviots have several distinct advantages as a breed, not the least of which is its very attractive appearance. This has made the breed popular with wealthy patrons desiring a few sheep to create a pastoral scene on a country estate.

Indeed, the pastoral scene on my country estate [snort] could use a few more Cheviots, so off to the fair I go.

Open breeding sheep divisions will be judged tomorrow [July 28] at the Orange County Fair in Costa Mesa, beginning at 10:00 AM. Yes, that Orange County. Shut up. Orange County has farms with sheep, ranches with cattle and wild, roadless areas with mountain lions that kill people. [Also: shopping.]

Three of the Cheviot spring ewe lambs at the Fair will be mine in about twelve hours. They've actually been mine for months, but their most excellent breeder wanted to show them a few times before I took possession. I'll try to get some snapshots. (Ulterior motive: to take pictures of sheep varieties bred only for show, because some of them look so different from sheep of the "same" breed raised for meat and/or wool. Show Dorsets and production Dorsets, for example, have become so different in appearance that for all intents and purposes they are now separate breeds. Does this sound familiar?)

Adopt a pit bull and let your perfect pooch be an ambassador for the breed! Be sure to read our pit bull adoption tips before you start your search.

God bless 'em, the ASPCA even has pit bull wallpapers for your 'puter. Yes, I'm an ASPCA booster.
*************
The BAD RAP blog is hoppin'. They have a link to the wonderful Lawdogs video that features Trooper Steve Gardner, pictured above, and two photos-worth-a-thousand-words of pit bull Nike, a rescued ex-fighter that went on to live a happy, peaceful life in a multi-dog home. Check it all out here.

Worst news for last. Tragic news: a child killed, mauled to death by two dogs. This local report in the Cookeville, Tennessee Herald-Citizen has the most details --- nine other news outlets carried a brief AP story. The victim was an eleven month old child. He was left alone in his playpen while the adults in the family visited and watched the older children playing in a pool outside. There were two dogs in the home: family dogs, inside dogs.

What mattered was that the toddler was left alone with them. And based on the information in the Herald-Citizen article, it's possible the dogs had never been around a toddler before.
"[D]ogs are expert discriminators," writes Jean Donaldson, "and adequate socialization to women or six year old kids does not guarantee a generalization to men or two year old kids."

When a baby in L.A. was killed by a Rottweiler a few years back, reporters were quick to write that the dog "was socialized" and "loved children." Every news article mentioned that a twelve year old neighbor used to take the Rottie for walks. But the dog had never been around infants.
The socialization window slams shut when a puppy is about four and a half months old, and if they haven't had positive exposure by then, some dogs may never be comfortable around men or two year old kids. "100 new people by the age of 3 months," says Ian Dunbar, and that means people of every age, color and condition. The more people the puppy meets, and the more positive associations he forms with those people, the greater the odds that he will grow up to be a friendly, well-adjusted dog --- and the safer all the people around him will be.
Socialization is huge. You can't overdo it. There is no such thing as an oversocialized dog. But even the best dogs shouldn't be left alone with little children. It's axiomatic: never, ever leave a small child unattended with any dog. This was a preventable tragedy. Never, ever leave a small child unattended with any dog.
Posted by Luisa at 12:33 AM