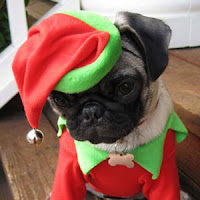 Remember Harley? She's the cute elf on the left. Harley lives in the Bay Area and has an adopted sister from Bad Rap, and she's friends with Lily, the pug in the navigation icon at the foot of each post in this blog. I'm very, very happy to be writing about Harley in the present tense: she is alive and well today after a near-death experience with a nasty chemical called xylitol.

Xylitol is used as a sugar substitute, and you can find it in many types of gum, candy, breath mints, toothpaste, mouthwashes, baked goods and other products.

Dog owners [and all people who love dogs] should be as cautious about xylitol as they are with antifreeze or rodent bait. This stuff can kill.

"It nearly killed Harley. Within hours, she went into acute liver distress. Her liver enzymes, which in a normal dog should be in the hundreds, were at 7,500. Her blood pressure was so low that my vet feared she would not be able to administer an IV catheter.

"Harley required two blood plasma transfusions and countless other medical treatments. I was extremely lucky that she even survived. The vet that saved her specialized in toxicology and said that xylitol-related deaths and poisonings are becoming more common. I talked to the dog owners in my group, and none of them knew xylitol was toxic to dogs - nor what types of products contained it."

Here'a a link to the ASPCA Poison Control Center's page on xylitol, and the obligatory Snopes link.

Right now, xylitol is used mostly in cookies, candies, cupcakes and other sweets developed for people who have diabetes. It's also sold in bags of crystals for baking. Because of its bacteria-killing properties, it is put into some oral care products, including Tom's All Natural and Biotene toothpastes.

It also is beginning to be used in a broad assortment of products intended for the general public. Among them: Jello sugar-free puddings and a wide variety of sugar-free gums, including Trident, Orbit, Stride, Icebreakers and Altoids. [Source.] 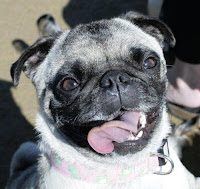 Stephanie says that xylitol should be as familiar to dog people as antifreeze, and as carefully managed if not avoided altogether. I couldn't agree more. Over at Dolittler, Dr. Patty Khuly has written a number of posts about this sweetener: here's the most recent one. Check them out, and spread the word — xylitol can kill, and it's killing more dogs each year.

Wow!
Glad to hear Harley is recovering.
I`ll definitely pass this warning on
to people.
I`ll bet a lot of people wouldn`t think twice about giving their dog a breath mint.

My own vet had some of the C.E.T pet breath freshener/rinse with Xylitol as an ingredient. They had no idea until I pointed it out. You would think vet products would be safe.

Glad to hear Harley is ok now. A great example of why people should teach a leave it command for items dropped on the floor.

I almost had heart failure when I read Marie`s comment about C.E.T.
That`s the toothpaste for dogs that I use.
I`ve just checked the tubes and it`s not listed but I`m placing a phone call to my Vet to verify.

Just got their call.
They checked and it`s ok.
At least what has been shipped here.

Hi and THANK YOU for posting Harley's story! It's also going to appear in the April issue of Silicon Valley Tails Magazine. I'm working to get it out to other publications as well. Cheers! Stephanie & Harley

There are good reasons for people to consume zylitol. Just don't leave near an animal. In people it kills bacteria, such as in sinuses, dental & throat. It can prevent the need for antibiotic use, by using it in a saline nasal spray. I use it all the time and it has made a great difference. I think products containing it should have warning stickers. I do have a dog, that I'm careful around. People don't think chocolate is bad just because it is poisonous to animals.