March 7: a late [and overcast] afternoon at the farm, looking north.
I lost a sheep in that greenness a week ago. It's hip-high, for crying out loud. The grass, I mean — the sheep, not so much. She just vanished. That's a five-strand fence, and in places only the top strand is visible, oy.

The lost sheep [one of my new Cheviots] is safe and sound now, but she only narrowly avoided becoming a red spot on the asphalt. When we finally located her, she was galloping down a lane towards an open gate and certain doom on a fairly busy road. The landshark grabbed her and took a drubbing [outweighed as she was by some 150 lb] but held on like grim death until I could catch up with them and slip a makeshift halter on the ewe.

I've seen videos of shepherds — Isle of Soay, maybe? — who use their collies to grab and hold island sheep, and as I recall it seemed vastly less stressful than our experience. My sheep and dog were both bloodied. No lasting damage, but still the worst injury to the stock I've seen in twenty years of sheep-keeping. A vet says I've been very lucky. 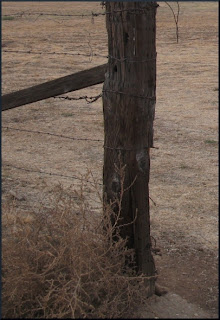 For years an old friend and I planted barley in these fields with no more irrigation than what nature provided, and the barley grew five feet high. Last year, not even a weed grew. For purposes of comparison: the photo on the right shows a fencepost in the same pasture last winter: the winter of no rain. It was miserable.

Off to feed the prodigal and her flockmates now — with far less excitement, God willing.

Green is my absolute most favorite color ever.

Goat quadruplets [not mine] born last week. Mother and babies all doing well: one of the kids is being fostered by an obliging doe that had just one of her own.

[Post title from García Lorca's Romance sonambulo. Original here. Figures that a poem having to do with a corpse has launched everything from salad reviews to blog posts about pasture. "Green, how I love you, green..."]
Posted by Luisa at 4:00 PM

I thought she was found happily munching the bribery hay.

That was the other one. I am never taking the Cheviots into grass that high again. Ever.