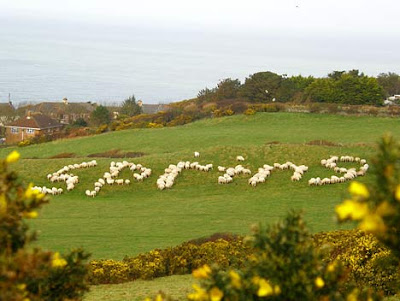 Even the i is dotted. Well done, ladies.
North Devon shepherd/author/filmmaker/television personality David Kennard can add "performance artist" to his resume with this gem.

Sheepdogs are trained to obey their master's every word. So when farmer David Kennard decided one of those words would be "Spring", his dogs did not hesitate.

They rounded up the flock on the hills of Mr Kennard's north Devon farm and, with a little help from their master, created a picture that reminds us that, whatever the weather, this is officially the first weekend of Spring.

The scene did call for a careful scattering of feed to make the sheep form themselves in the shapes of the six letters.

However, it was down to the team of Collies – who everyone knows border on the brilliant – to have the last word. They circled the 200-strong flock and kept them from wandering off-message.

Thanks to Carol of Frogdog Blog for the tip — visit her most excellent blog to read more about Kennard and his border collies.

And also, oh look! A book about sheepherding, by someone who is… an actual sheepherder! Someone send a note to Jon Katz about this.

Kennard [below with Ernie, Swift and Greg] knows how to pen compelling accounts of farm life, and it doesn't hurt that he shepherds in breathtaking country: 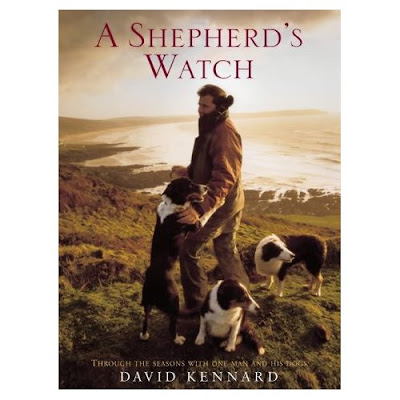 A Shepherd's Watch has excellent photos to supplement Kennard's writing, and The Year of the Working Sheepdog is a classic video: read a review here.

Kennard knows a thing or two about sheepdogs. He had a respectable showing with Swift and Greg in brace competition at the 1999 International Trial. From A Shepherd's Watch:

Greg was obviously aware that this was a brace run, and on arriving at the sheep had lain down and waited for a minute or so for his partner to arrive without a command from me. When Swift appeared, he simply got to his feet and moved across to his side of the sheep. I don't know how many people noticed his reaction, but it was something that I'll never forget.

The sheep in the photo at the top of this post are Kennard's North Country Mules. To learn more about mule sheep, see Dr. Mark Lelli's excellent Muleflock website.
Posted by Luisa at 8:57 PM

Thanks for that wonderful bit of sunshine to warm up what has been a very cold Minnesota spring.

Sheep are great, no matter what. And, they'll do anything for some corn - thanks for the great picture!
Gotta love the wooly mutton thingies...