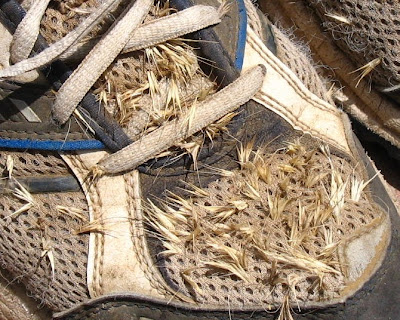 A sample of last year's crop. Foxtails love socks, running shoes and [rough-coated, especially] dogs. It's an unrequited passion.
Foxtail season is here, bless its horrid, sharp, barbed and dangerous little heart. I collected a few at the farm this week, and if I'm picking up foxtails, it won't be long before my dogs are picking up the deadly things, too.

Worst things first. Foxtail awns can enter a dog's body just about anywhere, and once in, they can migrate all over.

The image on the left shows the tip of a hugely magnified foxtail spikelet. See the barbs? [Click for big.] From Wikipedia:

The spikelets or spikelet clusters of foxtails are adapted for animal dispersal: The foxtails disarticulate easily, the barbs cause the foxtail to cling to fur, and movement of the animal causes the foxtail to burrow into the fur, since the barbs permit it to move only in the direction of the callus [tip]. In wild mammals that inhabit the native ranges of foxtail grasses, the fur is ordinarily short enough that the foxtails will eventually become dislodged, dispersing the seed.

Especially in the long-haired dogs and other domestic animals, the foxtails can become irreversibly lodged. Foxtails can also enter the nostrils and ear canals of many mammals. In all these cases, the foxtail can physically enter the body.

Muscular movements (or air flow, in the case of nostrils) can cause the foxtails to continue to burrow through soft tissues and organs, causing infection and physical disruption, which in some cases can result in death.

Foxtails that have progressed no further than surface lesions are ordinarily removed and the lesion treated with antiseptic and bandaged if necessary. Once a foxtail has passed beneath the skin, dogs are often treated with systemic antibiotics, and the foxtail either allowed to encyst and degrade, or in the case of actual or imminent organ damage, removed surgically (surgical removal can be problematic, since foxtails cannot easily be imaged by x-ray or ultrasound).

Foxtails embedded in the nostrils can migrate into the nasal turbinates, causing intense distress, and in rare cases into the brain. Foxtails in the ear canal can puncture the eardrum and enter the middle ear, causing hearing loss. In both cases, detection and early removal is the best treatment. 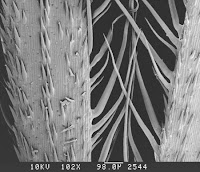 Because foxtails "burrow" through fur, soft tissues, and organs, some people think of them as parasites. Although they may be technically "alive", containing viable grass seeds, foxtails are equally dangerous dead, since their burrowing is purely mechanical, in response to movements of the affected animal. [Photos from Wikimedia Commons via Creative Commons.]

As you can imagine from this link, if your dog needs surgery to remove a foxtail, your bank account can take a hit to the tune of several thousand dollars. Even immediate removal of a foxtail from a dog's ear or nose can be pricey.

Last year my trainer, Anna Guthrie, nearly lost her good young dog Tikkle on account of a foxtail — Tick went into a coma after being anesthetized for removal of a foxtail she'd inhaled. A freak occurrence, but do check out Christie Keith's Pet Connection report on veterinary anesthesia.

I try my best to limit my dogs' work to areas where foxtails have been mowed or grazed close, but even in suburban backyards and parks there's a chance a dog can sniff up a foxtail awn or pick one up in a paw.

The trick to keeping foxtails at bay is grooming. From last year's post:

When I get home from the farm, I set my border collie on the "grooming table" [ours is an old cabinet topped with a carpet sample] and groom her from nose to tail. I start with a slicker brush or an undercoat rake and progress, every time, to the proverbial fine-toothed comb. My dogs are slick-coats, so this doesn't take too long. I comb forwards, backwards and sideways, and may comb through the same area several times before I spot a stubborn little awn. I check every orifice. (Stockdog bitches seem to have a knack for collecting a foxtail or two around the vulva.) I check carefully between the toes, and I check the bottoms of the feet.

And after we're done on the grooming table, I settle down on the kitchen floor and check my dog's underside while she's lying on her back.

I may go for days or weeks with no sign of a foxtail --- but just when I start asking myself why I'm grooming so religiously, I'll find an awn between my dog's toes. Eternal vigilence...

Foxtails can harm sheep, too: one reason I like Cheviots, with their bare legs and heads.

May all our critters be safe from foxtails this season. [Oldish link, but a good one: Dog Owners' Guide to California Foxtails. I'm adding it to the sidebar.]
Posted by Luisa at 11:57 PM

Thank you for this informative post. I will be linking to it in my akita related blog and passing it along to my other dog friends as well. What we call a foxtail in Maine looks different but does the same thing. Great reminder to groom often and well.