Iditarod links, and a moment of silence, dammit 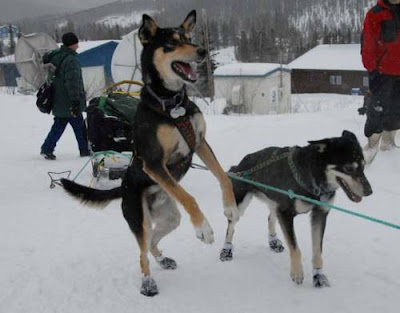 What we all love to see: "Jeff King's wheel dogs Lobben and Guinness are still rearing to go as they get checked into Ruby on Friday, March 7. Both dogs are leased from Kenai musher Jon Little." Photo by Photo by Bob Hallinen for the Anchorage Daily News.

*Please note: all comments/descriptions are by the Cabela/Iditarod crew at Iditarod Race Talk, linked above.*

OFFICIAL IDITAROD WEBSITE (Streaming live coverage, archived videos & more, but to see much of it you need to subscribe to Iditarod Insider for $19.95/yr)
http://www.iditarod.com

BSSD TALK FORUMS (Very active Iditarod talk forums! If you're an Iditarod junkie or a complete newbie to the sport, you are welcome here. People of ALL ages participate in these moderated forums.)
http://mushing.bssd.org/forum/

BSSD CHAT ROOM (This is the best chat room and it worked flawlessly last year. Open to all ages.)
http://mushing.bssd.org/index.php?option=com_content&task=view&id=35&Itemid=46

BSSD IDITAPROJECT (The Bering Strait School Distict's Iditaproject allows students to act as new media journalists. Students living along the trail provide news and trail condition updates, videos, pictures, a forum area, and live chat. In addition, schools can sign up for free, live video conferences during the race that focus on the history, culture and mushing traditions of the villages that make up BSSD.)
http://mushing.bssd.org/index.php?option=com_frontpage&Itemid=1

OFFICIAL MAP OF THE IDITAROD (Includes distances between checkpoints)
http://iditarod.com/race/route.html

LIVE GPS MUSHER TRACKING (This is a special test program you can use to track select mushers in real-time.)
http://www.iditarod.com/race/ionearth.html

EARTHSLOT'S COVERAGE OF THE 2008 IDITAROD IN 3D (Movies of the trail flythrough, data updates of musher locations & more) *Newly updated! Check this out!
2008 EarthSLOT Data Mashup:
http://www.earthslot.org/iditarod/index.php
Google Earth KML File Download:
http://glink.gina.alaska.edu/public/iditarod/iditarod2008.kml
*If you have any trouble getting this to work, please email me. This site is absolutely amazing!!!

WUNDERGROUND (Northern Route Map with weather and race info. Click on a checkpoint and get the weather. Click between two checkpoints to find out the distance between the checkpoints, the total distance traveled and the distance to go.)
http://icons.wunderground.com/graphics/iditarod_north.swf

ULTIMATE IDITAROD (There will be no updates or commentary this year. Tyrell was recently married and Jim is finishing up medical school, and both are extremely busy. But there's some interesting information on their site so I'll leave the link up.)
http://www.ultimateiditarod.com

IDAHOCLIFF'S 2008 ARCHIVES (with comments as to how the leaders are doing at various points along the way)
http://home.custertel.net/~ckeene41/Archive08.htm

Dog deaths in the Iditarod are generally traced to gastric ulcers. On her excellent web site, Iditarod veteran Karen Ramstead [who dropped out of the race last year following the death of her beloved lead dog, Snickers] has more information about gastric ulcers and about the Snickers Memorial/Ulcer Research Fund. Excerpts:

Nine different studies that have included, in some manner, endoscopic examination of sled dogs after exercise [...] have yielded relatively consistent results:

· Approximately half of all dogs running a significant distance (100 miles/day or more) had evidence of stomach ulcers, provided they were not receiving any medication intended to reduce or eliminate the problem.

· Endoscopic evidence of stomach ulcers can be found after as little as a single 100 mile run at a modest (8-9 mph) pace.

· In the majority of dogs, ulcers heal with 3-5 days of rest, so that during pre-exercise exams, most dogs do not have visible evidence of stomach ulcers.

· We have found no evidence that a particular blood line or feeding strategy is related to stomach ulcers in sled dogs (although these issues have not been thoroughly investigated).

· We have found minimal evidence of certain dogs being predisposed to ulcers.

Chemical tests of [sled dogs' stomachs] have also provided evidence that the stomach is leakier during exercise than normal, and that may be part of the overall development of the ulcers by letting stomach acid leak into the wall of the stomach and damage it. There is some evidence that the dog's response to the stress of running can cause that leakiness, but this is not a certainty, since it is possible that the leakiness causes the stress, rather than vice versa. We are reasonably certain that stomach ulcers in sled dogs are not caused by bacteria (like in humans) or by the type of food being fed (like in horses) based on tests of the stomach biopsies and analysis of the distribution of the ulcers within the stomach.

Which raises the question: have modern-day shepherds whose dogs run great distances each day during lambing season ever noted a problem similar to the gastric ulcers suffered by sled dogs? Hunters whose hounds run all night long — have you noted a problem? And how is it that Iditarod mushers whose teams finish consistently in the top twenty manage, by and large, to keep their dogs so healthy? I wish I knew. Hoping not to jinx the man: here's Iditarod record holder Martin Buser, who has never lost a dog. 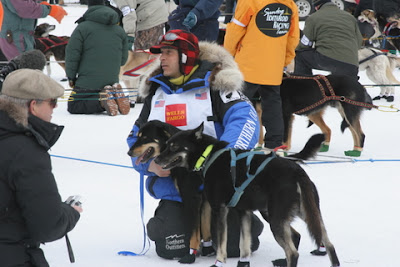 Buser has a tradition at the finish line: he turns his dogs loose. They roll, shake, sniff and roam a bit — and actually return to him when called. I heart Martin. His son Rohn [named after a race checkpoint] is competing in his first Iditarod this year. Good luck and healthy teams to them both.
Posted by Luisa at 2:49 PM

I've wondered about the statistical significance of the deaths of sled dogs in the Iditarod for years. When you consider the sheer number of dogs involved -- I figure about 2,000 -- over a two-week period, a certain amount of mortality is to be expected, even if they were just 2,000 random dogs hanging out at home.

But to have so many of them develop a similar condition says something. The random background mortality would certainly be distributed over many causes, not clustered around gastric ulcers.

As far as comparisons to other working dogs, I suspect it's pretty uncommon for a working sheepdog to sustain the continuous running for 100 miles in a day. Sure, they run that much and more, but they do it in lots of relatively short bursts. It's a whole different kind of stamina, and they aren't pulling anything.