Zamora Hills [and some dog show] 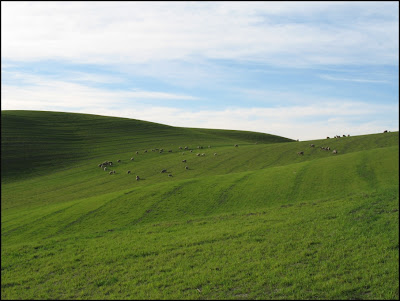 Michael and Bridget Slaven, both from County Tyrone, Ireland, settled in the hills west of Zamora, CA in the 1800s. The ranch now belongs to their grandson Bill Slaven, host of the Zamora Hills Sheepdog Trial. Click on the photos to make 'em bigger.
Take along a pair of binoculars. The range ewes are set out on a ridge maybe 700 yards distant, and the sheepdog won't be able to see them as he walks with his handler to the post. The dog -- a working border collie -- will run more than half a mile to reach the top. The hills all around are vast and green and empty: it's beautiful countryside, not great for crops, but good for sheep and cattle.

The Slaven family's Zamora Hills Sheepdog Trial is one of the best-known in North America. The dog that wins won't earn points towards a title, since the USBCHA shuns such nonsense, but everyone at the trial will know what that dog is made of. The judge this year is Jack Knox, and with any luck I'll be there with bells on to watch part of it. [Probably Sunday, given the drive and all. Look for a pug.]

If you are going to be anywhere near Northern California from February 15th through the 18th, pack the folding chairs, sunblock and binoculars and follow the directions to Zamora Hills:

Directions to trial site: North on I-5, take Zamora exit, head west, 92B is about 1-1/2 miles from exit. Turn left and the ranch is the first place on the left. From Highway 505 – Take the Zamora exit and head east. Turn right on 92B (about 4 miles from exit).

First run is at 7:00 each morning -- Nursery and Pro-Novice dogs run on Monday. Food and drinks will be available at the trial site. There'll be fine handlers and dogs from as far away as Canada. Bill Berhow will be there: he and his good dog Pete won Soldier Hollow last year. Here are some shots from 2007. 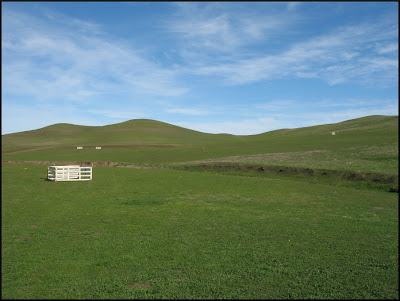 The handler's post -- the Lombardi Tower -- is out of sight on the left. Sheep are set out on the far ridge, at about one o'clock from the orange post in the middle of the photo. There's a dry creek bed between the drive panels and the pen. Sheep are brought around the orange post (rather than around the handler's post) prior to the drive. The shedding ring is to the left of the pen. 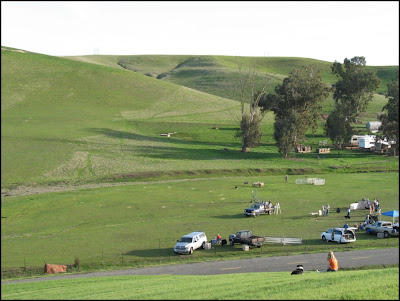 The shedding ring is in the middle of the photo, marked with sawdust. The shed's done --- the dog is fetching the sheep to the pen. 2007 judge Bill Berhow is seated on the flatbed truck. The Lombardi Tower [named in honor of rancher Guido Lombardi, a long-time champion of the working border collie in California] is just to the right of the shedding ring. 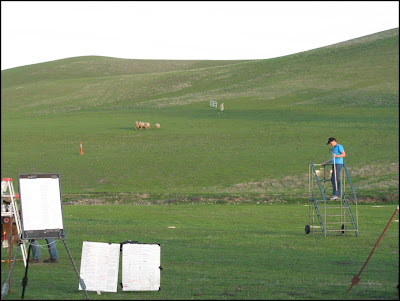 Top young handler Haley Howard steps down from the tower as Diona [out of sight behind the sheep] brings the range ewes to the shedding ring. Legs at left belong to the judge -- I recognize the knee brace ;~) 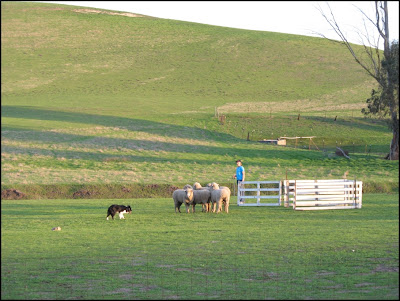 End of the day, and Diona is about to put her sheep in the pen. The good ones make it look so easy.

Something else is coming up... oh, yeah. Westminster.

Head
The skull is broad and flat between the ears, slightly narrowing to the eye, with a pronounced stop [from Merriam-Webster: "the depression in the face of an animal at the junction of forehead and muzzle"], cheeks deep but not prominent. The muzzle tapering to the nose, is strong and the same length as the skull.

No, that isn't from the AKC standard, but it might as well be, since the conformation ring in the U.S. has all but surrendered to the Australia/New Zealand standard. [You can read more about the border collie and the AKC here.]

Breeding to the conformation standard of Oz means that a border collie pup without that pronounced stop will be sold to a pet home on a spay/neuter contract, no matter how excellent his health and how keen and biddable he may be. His good-looking littermate with the "perfect" stop -- the perhaps slightly more anxious, perhaps somewhat less intelligent pup with perhaps one or two very mild health issues -- is the one that will go on to win a championship, and he is the one that will stay in the gene pool. And so it goes, generation after generation. "This is the head I'm breeding for," I heard a woman at ringside announce the year border collies were "recognized." Her dogs won at Westminster.

Breeding to a conformation standard produces healthy, stable companion dogs by accident rather than design. This isn't meant to suggest that show breeders want to produce dogs with health issues and less-than-stellar temperaments, or that they don't take health and temperament into consideration. Of course they do. But the pronounced stop [among other characteristics described in the standard] is absolutely essential, because without it a border collie has no hope of success in the breed ring.

If the goal were simply to produce healthy, temperamentally sound companion dogs, breeders might take a page from guide dog experts and start crossing Labs with Goldens. They would breed pugs that don't need surgery in order to breath normally, and bulldogs that don't require C-sections to whelp. They would breed dachshunds and Bassets that don't develop back problems.

Conformation-bred border collies are beautiful dogs, and no doubt fine companions, but the cookie-cutter structure, the matching fluffy coats and those pronounced stops have come at a considerable price. If you are lucky enough to be at the Zamora Hills trial next weekend, you'll see what the border collies at Westminster have lost.

Zamora's close. I'm going to try to catch it, maybe the Monday.

Would people laugh if I brought my Sheltie to watch? (Don't answer!)

There was a cute little Sheltie there last year! Hey, if my sister and I can show up with a pug... "Away to me, Lily! Awaaaaaay to meeee!!" Lily the Sheep-pug ;~)

Seriously, I can't leave all six of my dogs at home for the petsitter, so I'll probably have a collie or two along for the ride.

Zamora's a wonderful trial. I think my trainer Anna is doing set-out this year, if her knee [torn cartilage, ow] can handle it.

While it would obviously be possible to breed for looks and brains/drive, it is true that breeding for looks first is a slippery slope especially when such trivial details as ear set, coat length, stop etc become selected for and the breeds become extremely stylized.

You never know what you are bringing along or leaving behind when you breed strictly for appearance.

Now, imo, breeding for size, coat length, etc, is still breeding for appearance as in the example of dachshunds (not the show ones, the working ones). You want a low-slung dog with good diggers and the right size of legs, chest, etc. Same for terriers. It's just more general, not as fiddley as in the extreme show standards for some breeds.

I think the problem is whoever writes the standards in the first place.

Have you seen a Standard Dachshund at a show lately? They are huge, probably three times the size they used to be. Seriously, I saw a longhair that looked like an Irish Setter on short legs and he wasn't the only one. Smooths like that oo. It's bizarre. What they call Minis these days are what we called Standards years ago. Why on earth would you want a big dachshund? Makes no sense to me.

I saw your LibraryThing and hit the link. Oh crap. Now I've just spent hours playing around and putting my own together.

What a lovely waste of time.

You HAVE to read Top Trainers Talk About Starting a Sheepdog. My copy just arrived and it is ossum.

I'll be there too. Hope to meet you and some of the other BCB-ers.
-Sharon (sluj)

I`m here begging.
You can help Ontario and it won`t cost you a cent.

A wonderful family is donating 10 cents per comment (on this video)
to the Ontario Legal Challenge
(www.bannedaid.com)

It`s a violin recital.
You don`t have to watch.
You just have to comment.

I'll be there! Look for a kinda fluffy 14 week old BC pup. "Ki" has a very strong eye, I am just hoping I can control him around the other dogs and the sheep. I think I can! I hope I can!