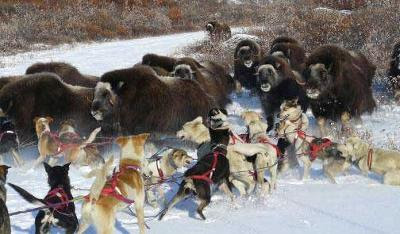 The kicker: no dogs or musk oxen [or people] were harmed during production of this photo. Shot of a lifetime by Heather Williams. Larger version here, at AlaskaStock.com.
The 2008 Iditarod starts March 1. Northern Route, this year. 1112 miles to Nome. Fastest time: eight days. I'll be rooting [as usual] for Martin Buser, who holds that record, and cheering the memory of Susan Butcher, one of my generation's most inspiring and courageous women.

In honor of The Race I Hate to Love The Last Great Race , here is an only-in-Alaska story from last October [hat tip: the redoubtable Tranquilis, Iditarod authority and fellow race junkie]. From the Anchorage Daily News:

Seventeen-year-old musher Melissa Owens was a mile into a training run last week in Nome when she saw a musk ox standing on the left side of the road. She stopped her dogs so the woolly beast could cross to the other side.

"Then all of a sudden the bushes come alive, and I think, ohhh, this can't be good," Owens said. "There's more musk ox in there, isn't there?"

Sixteen more, to be precise. Just yards away from 23 huskies, including two young and curious leaders.

At first, it looked like the herd wasn't interested in the dogs. The animals milled around a bit and then headed up a hill toward Nome's old Army hospital. Owens, behind the wheel of the truck her dogs were pulling, inched her team forward.

Shy Girl and Kiwi, the young leaders, veered to the right, provoking the musk ox and setting off the first of three charges.

Heather Williams, sitting next to Owens in the truck, leaned out the window with a camera and snapped one of the most unbelievable photos you'll ever see: A herd of hulking musk ox headed straight toward 23 dogs harnessed to a gangline and tangled in a knot.

"I remember them stomping and snorting and grunting and stuff, and I remember the dogs barking," Owens said. "They were almost nose-to-nose. The big bull charged them and the dogs did exactly what you see in the photo."

Panic frikkin' City. Read the rest here. Credit to the now eighteen-year-old Owens and 21-year-old Williams for managing to unhook six dogs and pull the rest to the relative safety of the truck. Owens said, "It's by the glory of God that we're still alive and I didn't spend the day in the emergency room or the vet's office." Alaska: where men are men, and Melissa Owens wins the [2005 Junior] Iditarod...

A few more thoughts on The Race I Hate to Love: maybe, please God please, no huskies will die this year. [That would be a first.] Maybe not a single team will have to be led/cajoled/dragged out of the last eight or ten checkpoints. Race defenders: "We don't make these dogs run -- they love to run!" Believe me, we know they do. But after 700 or 800 miles in four or five days, many, if not most of these tremendous canine athletes aren't eager to hit the trail. See the anonymous musher in the photo? That's a consistent top 20 finisher [not Susan, not Martin, not Lance, not the disgraced Ramy] trying to leave Unalakleet, with hundreds of miles still to go. If I were in charge, a situation like the one in the photo would mean a mandatory 48-hour rest. If these superbly conditioned dogs aren't willing to step out briskly with the musher on the sled runners, they've been pushed too hard.

And on that cheery note [damn you, Iditarod!], here are a few of the links I'll be checking each day:

My wish for the 2008 Iditarod: that all the dogs enjoy it from start to finish.
Posted by Luisa at 10:50 PM