Lions, red knots and a valentine 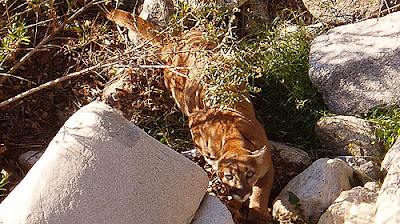 Why you should always have your camera ready. Photo by Matthew Dickie.
I love that this happened at NASA's Jet Propulsion Laboratory. Non est ad astra mollis e terris via [there is no easy path from the earth to the stars]:

JPL employees have been spotting mountain lions for years. The NASA laboratory is perched on 177 acres climbing the side of the San Gabriel Mountains into the open wilderness of the Angeles National Forest.

On its east side, the Arroyo Seco -- a stream that goes from dry to torrent depending on the weather -- courses out of the mountains onto a sandy flood basin behind the Devil's Gate dam.

Because mountain lions and other wildlife routinely follow streams, the Arroyo Seco is a natural corridor, funneling a 32-square-mile watershed down to a narrow cut -- where Dickie spotted the cougar[...]

One of several January sightings in the L.A. area: full story here.

The red knot is an amazing little bird that migrates each year from South America to its nesting grounds in the Arctic. "A sixteen-year-old red knot has flown enough miles to get to the moon," says one birder. Grim news: some population models indicate that the species will be at or near extinction in 2010.

The knot's dependence on the eggs of the heavily harvested horseshoe crab has placed it at odds with another species -- humans. Conservation groups, lawmakers, fishermen, scientists, and ordinary citizens have all entered the debate. But even as our actions have imperiled the red knot, we can also preserve the species, by regulating the fishing industry and keeping clear of the beaches that the knots rely on during migration. Where nature ranks in our system of values will dictate how far we are willing to go to protect the red knot.

A master of long-distance aviation, the red knot makes one of the longest migratory trips of any bird -- 9,300 miles along the Atlantic flyway from its wintering grounds in southern South America to its high Arctic breeding grounds. The journey is so exhausting, it requires two to three stopovers for refueling. The horseshoe crab egg feast they will consume at Delaware Bay, is not just an indulgence -- it's absolutely crucial for the birds' survival. When the knots arrive at Delaware Bay, their bodies are half their starting weight, devoid of fat and even some muscle. Here, the red knot will take about two weeks to double its weight so it can continue its migration.

The red knot is a creature in peril. The U.S. Shorebird Conservation Plan lists the red knot as a "Species of High Concern," based on declining population trends and threats on non-breeding grounds. In the last 20 years red knots have declined from over 100,000 to less than 15,000. And in 2006, the knot was named a candidate for Endangered Species Act protection as an emergency measure to slow the rapid fall of its population. In the Delaware Bay, the knot has suffered a decline so severe that some experts predict the population stopping over at the bay could disappear within five years. [Source]

Bad news for the red knot: on Monday the New Jersey Marine Fisheries Council "lifted a state ban on horseshoe-crab harvesting and will allow a limited fishery in the Delaware Bay this spring."

Want to pitch in? Every dollar helps, and they take PayPal/credit cards: click here to go to the DOS donation page. It's too late for birds like the passenger pigeon and the Carolina parakeet, but maybe we can help save the red knot for our grandkids. We can try.

[The Nature program Crash: A Tale of Two Species is scheduled for a repeat this Saturday: check local listings.]

From Ironic Sans, a good blog linked to a good blog in the Nature Blog Network, now in the blogroll.
Posted by Luisa at 10:11 PM