Vick dogs at Best Friends, and on the front page 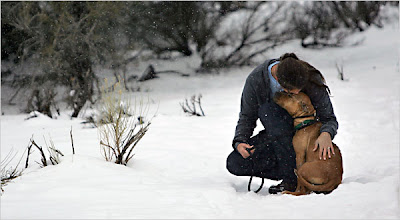 And I know I should be doing a happy dance over quotes like this:

“These dogs have been beaten and starved and tortured, and they have every reason not to trust us,” Mr. Garcia said as Georgia crawled onto his lap, melted into him for an afternoon nap and began to snore. “But deep down, they love us and still want to be with us. It is amazing how resilient they are.”

But in order to reach that great quote I had to get past this:

“The successful rehab rate for these kinds of dogs is unknown because nobody has ever studied it until now,” Dr. McMillan said. “You might see an incredibly friendly dog, but does that dog’s personality change over several weeks, over several months, after psychological trauma? Are they hard-wired to be aggressive, or can they change? What’s the best way to work with them?”

Honestly, you'd think people at the nation's best-known animal sanctuary would be old hands at caring for unsocialized dogs, abused dogs, fearful dogs, dogs with obsessive-compulsive issues. City pounds and reputable pit bull groups have dealt with badly-scarred ex-fighters, and adopted them out. Yes, a dog's personality can change after psychological trauma [but I'd be very surprised to see "an incredibly friendly dog" become a dangerous, brooding loner unless some underlying health issue were involved. Dogs aren't John Rambo]. Some pit bulls are hard-wired to be dog-aggressive, others not so much, some not at all. What's the best way to work with them? As individual dogs. 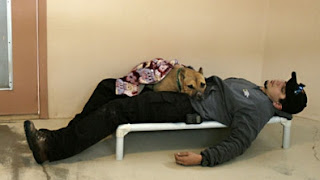 [On the left, trainer John Garcia plays pillow.] To be fair to Best Friends, the dramatics may be due to quotes taken entirely out of context over the three-day period the Times reporter spent at the sanctuary. I hope people will remember that all the Vick dogs were treated badly, and over half are already in foster homes and slated for adoption. No dog on earth can survive terrible abuse heart-whole the way a pit bull can: a fact that makes those of us who love pit bulls feel some particularly serious anger and contempt for their abusers, believe me. [I know, I know: Don't hate -- educate.]

Some pit bulls are predisposed to issues like separation anxiety and sound sensitivity, and can suffer from these conditions as much as any border collie. (My male pit bull shakes like a leaf when the wind blows and a door starts to bang on its hinges [or he would, if I hadn't developed door control OCD years ago].) It stands to reason that abusive treatment would make these conditions worse. When I read in the NY Times article about toothless Georgia, my first thought was that she might have worn her teeth to nothing by chewing obsessively on rocks or on her chain tether. And talk about zero socialization:

Little Red is a tiny rust-colored female whose teeth were filed, most likely because she was bait for the Bad Newz fighters. Handlers cannot explain why loud noises make her jumpy.

Cherry, a black-and-white male, has what seems to be chemical burns on his back. His file at Best Friends says he loves car rides and having his backside rubbed. But like many of Mr. Vick’s pit bulls, he is petrified of new situations and new people.

Oscar cowers in the corner of his run when strangers arrive. Shadow runs in circles. Black Bear pants so heavily that he seems on the verge of hyperventilation.

If someone wrote to the Border Collie Boards about a dog that jumped at every sound or rubbed its nose until it bled, you might see a response like this one [by a postdoctoral scholar involved in the Canine Behavioral Genetics Project]. Or a link to an article like this, by the veterinarian who literally wrote the book on companion animal behavior. Excerpt:

Storm and noise phobias are emergencies.

They will only worsen with exposure, and the rate at which they worsen depends on the neurochemistry of the dog and the severity and unpredictability of the storms [...]

Treatment not only saves lives, but it means the difference between a life of quality or a life of pain and suffering. Treatment can involve the dreaded behavior modification, but this is one case where drugs are essential and not optional.

But enough, already: I'm sure the Best Friends folks know all this. I wish for these pit bulls a comfortable future of long walks, cozy sofas and belly rubs from loving owners, and I know the people at Best Friends will do all they can to ensure that future. Follow the whole story here: Best Friends Blog - "They’re front page on the New York Times."

Edited to add: Here's another nice write-up, this one courtesy of ABC News.

I just love looking at the new pictures and videos of these dogs.
They seem to want to just fold into their new caretakers.
It`s probably their first experience with love and tenderness from humans.
They`ve come a long way in a very short time.
I`m sure there will be those looking for any sign of failure on the part of the dogs and their caretakers but there is only one way to go when you`ve been at the bottom and that`s up.
They`re well on their way.
If nothing else,they`ve been touched by kind hands.

>When I read in the NY Times article about toothless Georgia, my first thought was that she might have worn her teeth to nothing by chewing obsessively on rocks or on her chain tether. <

Yep, yep. When we first met Jane/Georgia, she was having herself a little party by crashing her metal food bowl around like a hockey puck and grabbing onto the chain link of her kennel and shaking it like Zeus on a rampage. Just for fun. She's a high-energy girl who's learned how to entertain herself -- and no doubt some OCDs and the teeth wear have resulted from the boredom of life on a chain.

You have a good eye, Luisa. But I agree that the BF's people are doing a wonderful service to the dogs by demonstrating the rare art of human compassion for so-called killa dogs. Bless'em.

this was a nice article, and it's wonderful to see the dogs getting such thoughtful care. but i also wondered about her teeth - pit bulls often break teeth chewing on chains and rocks. and then, i have to take issue with the statement that georgia had been "forcibly bred." how exactly does a female in heat get forcibly bred? sounds like a little stretch of the truth for public sympathy to me.

RE: being 'forcibly bred':

Here's a link to a slate.com article on the items found on Vick's property, including a 'rape stand':

Don't know if that was true for Georgia, but evidently they do exist.

From the Slate article: "[B]reeders of attack dogs place special value on females that are so mean they might bite any male dogs that get too close."

But game-bred dogs are not "attack dogs," and litter announcements I've seen often include a photo like this one. I'm inclined to suspect that "unforced" matings are the norm.

Of course, Vick was such a damfool he might not have known that even the most tolerant bitch isn't receptive the whole time she's in heat.

what's called a "rape rack" in the media is just a breeding stand. they are not unusual and not a torture device. they are actually used by many legitimate breeders of american pit bull terriers! they can make the breeding of dog-aggressive dogs safer for all.

like it or not, dog aggression is a breed trait of many apbts, not an aberration. it positively doesn't mean that they are an "attack dog" - they can still be wonderful companions for responsible owners.