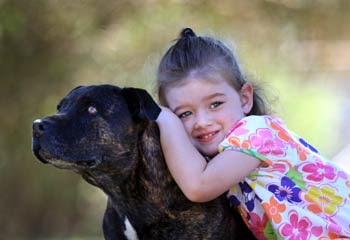 Roary the Staffordshire bull terrier with three-year-old Ebony Davis.
The genus is Pseudonaja: false cobra. A bit misleading, since the Australian Brown Snake is more dangerous than its Indian cousin Naja. Pseudonaja textilis, the Eastern Brown Snake found in Victoria, is considered the second most toxic land snake in the world.

Roary the ten-year-old Staffy bull didn't know that, of course. But he would have known something was wrong: there was a strange animal; there was Ebony's father, Tim Davis, lunging for his daughter as the snake reared to strike at the child. If fear is a thing dogs can sense, smell, taste, the air in that yard must have been acrid with it.

Roary jumped on the 1.5-metre snake, bit it and swung it clear of Ebony and her father in the backyard of their home.

But the family pet's bravery almost cost its life.

As Roary held on, the snake bit him repeatedly on the flanks and one ear before breaking free and slithering under a shed.

Ebony's father, Tim Davis, 38, said the dog "did a lap of honour around the yard, with his tail on high, and then he went in the house and collapsed".

"As I wiped the venom off his body, his legs gave way and his head came down on the floor," Mr Davis said. "There was no sign of life in him."

Mr Davis put Roary on the front seat of his car and rushed the dog 10km to Kangaroo Flat Veterinary Centre, near his home at Lockwood in central Victoria.

"He was quite still and I kept stopping to breathe some air into his nose, but I was sure he was a goner," Mr Davis said.

"When we got there, the vet told me how expensive the anti-venom was and how slim his chances were with so many bites.

"I said, 'Money doesn't matter; he's saved my little girl's life. Just get on with it'.

And the tough old dog pulled through! "Running in the yard like a puppy," according to a reporter. You can read the whole story here. I heart that photo of Ebony and Roary.

And speaking of Staffies:

The Staffordshire Bull Terrier Club has informed us that Michael Vick was shopping SBs to add to his collection. OUCH. So - in case you didn't already guess - Jonny and maybe even a few of our other Vick dogs may be all or part Staffy Bull. If Michael Vick's House of Horrors isn't reminder enough, breeders - PLEASE - screen your friggin' clients and know where you're sending your breeding stock! Your dogs and your breed's future are depending on you.

That word from the folks at Bad Rap, who are seeing lots of Staffordshire bull terriers in shelters these days.

And is that Rachel Ray's sofa on the Bad Rap blog? Jon Stewart's red pillow? The Donald's Hermès-orange bag? We'll know for sure February 29th when Jonny Justice works his charms on a famous New Yorker. [Earlier, if Donna tells all.]

Oh, and the most toxic land snake on the planet? Oxyuranus microlepidotus, the Inland taipan of [where else?] Australia.
Posted by Luisa at 11:22 PM