What's in the water?

Consider what the floodwaters swept up and deposited in Iowa's streets and yards and homes: factory farm waste, fuel, sewage, pesticides, God-knows-what deadly pathogens... "Officials recommended that anyone working or living in the flooded zone get shots for hepatitis and tetanus," reported the NY Times. Doug Hawker, an environmental specialist with the Department of Natural Resources, told the Times: “It’s bad. We honestly don’t know what all is in it, but it’s an absolute witches' brew.” 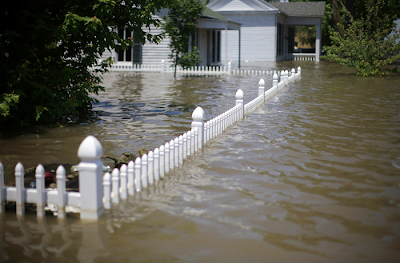 The disaster will be televised [and photographed]: see the Washington Post's gallery here.
As always, terrific reporting and commentary from The Ethicurean:

It goes pretty much without saying that there’s no way anyone could have predicted just how bad [the flooding] would be. But in recent years, we’ve become less and less able to predict flooding period, not just particularly extreme events. Why? In part because since September 11th, the Bush Administration has steadily cut funding to stream and river gauges, which measure the changes in flow patterns and water levels that signal a potential flood. Notably, it is doing the same for programs that monitor water quality.

Which means that when Iowans begin to ask what’s in their drinking water, it’s entirely possible that no government entity will be able to tell them.

If you’ve read my previous posts on Bush administration attempts to reduce public access to information about toxic substances in agriculture — from CAFO air pollution to pesticides — then the coming rant will sound familiar. Here we go: In addition to cutting funds to monitor stream flows, Bush has axed funding to the National Water Quality Assessment (NAWQA) program, which collects long-term data on groundwater quality and drinking water supplies. NAWQA had 496 water-quality monitoring sites in 2000. Now it has 113. The administration’s 2009 budget proposal cuts funding even further, and the U.S. Geological Survey, which implements the program, estimates that they’ll have to halt the collection of water quality data completely in 29 states as a result.

Also on the chopping block is the Toxic Substances Hydrology Program, which Bush has been trying to eliminate for years. As it happens, this is the program charged with identifying and tracking data on water pollution from pesticides. Bush’s 2009 budget proposal zeros out the program. It’s convenient that the administration has also suspended the Ag Chemical Use Survey; since we won’t know which pesticides are being used on U.S. crops, nor how much, what’s the point in trying to track their presence in our water?

Go to The Ethicurean for the rest of this important article, and for some of the internet's best reporting on our food, where it comes from, and what we know about what's in it.
Posted by Luisa at 11:05 PM

And because the residents are mostly dealing with the disaster in typical stoic rural midwestern fashion -- there's no sex, violence or controvesy for the media to cover.

ANYONE who more than cursorily looked into Mr. Bush's environmental record as governor of Texas should not be the eensiest bit surprised by any of this.

I mean, my doG. As long as it was on private property and I bribed someone to say it wasn't lethally toxic, if I lived in TX, I could build a freakin' landfill in my backyard.

And I say this as someone who turned down more than one 6-7 figure project doing just this in a previous life...