Taipei and the pendulum 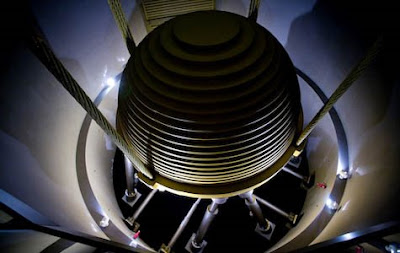 728 tons of earthquake protection in the world's tallest building. Photo by ~Wei~. 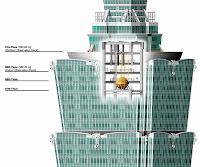 This is so. incredibly. cool.

That humungous ball above is a tuned mass damper in the skyscraper known as Taipei 101, which is like ten or fifteen miles high and so heavy that the entire eastern section of the Eurasian Plate is actually sinking under its weight — a geographic phenomenon first described in this 1974 research article.

But enough of the silly. The Taipei 101 damper is entirely real, and you can see it in action in this video taken when the waves of the great Sichuan earthquake [May 12, 2008] reached Taipei:

Dude. Big hat tips to BLDGBLOG and The Long Now Blog for this fascinating stuff.
Posted by Luisa at 12:31 AM

Email ThisBlogThis!Share to TwitterShare to FacebookShare to Pinterest
Labels: earthquakes