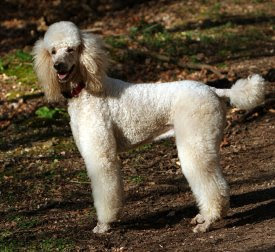 Hasn't killed anything — yet.
After her Maltese mix was knocked from her arms and mauled to death by a Standard Poodle at a popular Ohio dog park, owner Jane Gsellman is leading a drive to ban the large, athletic breed from the city of Stowe. "Those dogs should be muzzled in public," she said, "and poodle owners should be required to carry extra insurance and pay more for dog licenses. As terrible as it was to lose my puppy, what if the victim had been a child?"


I made that last part up. After her puppy's death, Jane Gsellman actually demanded a separate entrance to the small-dog side of the dog park. [As she points out, it's insane that a small dog had to be killed in order to get plans for the separate entrance in motion.] No word on what happened to the Standard Poodle or his owner. No breed-bashing at all.

"As seen on a daily basis at the dog park, many pet owners consider their dogs as integral members of the family. We understand that the loss of a pet is very devastating and we are very sorry for the owner's loss."

Not that you subhuman thugs with pit bulls have such feelings, which is why it's OK for us to take your dogs away and kill them. Good old Ohio.

Did I say something about a petition...? Yeah. [Good old California.]
Posted by Luisa at 12:54 AM

You crack me up Luisa.

This is just another case of "punish the breed not the deed". I understand the owner loves their dog and does not understand how the large poodle could have ever attacked and killed another dog. Dogs are animals not another member of the family...they are not humans. They require training and socialization. The answer is NOT to eliminate the breed of dog but to educate owners of the responsibility of owning a dog. I admire Pit Bulls who are loving to everyone they meet, are wonderful with children and any kind of animal if they are socialized with. They are banned in some cites, taken away and killed just because of their breed, with NO PAST AGRESSIONS. Owners have to move or have their dog killed..just because of the breed. If you own a German Shepard, Akita, Chow and now a large Poodle they are at risk. What next.
Punsh the owner who should not have the dog in the first place or the vicious dog who is so unlucky to have the life it was given, not the breed and not the responsible owner who takes proper care of their dog. We would not punish a race of humans for the mistakes their ancestors made, why do we punish animal for that reason?

I am the puppy's owner, I don't know where in the world you heard that I had started any sort of petition. I have nothing against standard poodles. It was a tragedy and it could have been any breed. You quoted me in your blog and that was NOT in ANY WAY a quote from me. I want to make that very clear.

I want to make a comment about situations that do happen at Dog Parks... Owners sadly do not govern their dogs.. I have seen some pretty bad bully's at dog and I mean bully's However owners have to pay attention to their dogs and read dogs body language it is up to us to intercept when bully occurs ! However I have been on walks with one of my three standard poodles which all are titled in Obedience. I have been approached by owners with their dogs on retractable leashes which in my opinion should be outlawed and they allow their dog to approach my standard. I always have to intercept and ask them to take control of their dog and it is almost always a small dog. Now my boys are welled behaved however if a strange dog goes underneith my poodle you can bet it will snap its little neck... Now who is at fault????? The little cute dog that the owner had no control over and allowed to approach a strange dog and go nose to nose or the standard poodle who is on a proper leash and at side in healing position?I can tell you it would be my poodle!! So folks always controlled meet and greet!!! a dog park to me is always a disaster waiting to happen and please learn and understand dogs body language some dogs just are not suited for a group of dogs of all breeds to hang together ... Poodles by nature are intelligent and fun love to be the center and are very loyal I'm sure this situation there was no control or understanding of dog body language on both parts of the owners.. The last place I want to socialize my poodles is at a dog park... My youngest Poodle has issue as he does not understand others dog body language so he barks very loud at other dogs if they approach him he is good with other poodles but not other dogs this stemmed from a very early age in the whelping box. Most puppies temperament has developed by 6 weeks of age. There is some great videos on dog bullien at dog parks on youtube it is good to watch to see and understand the dogs body language and as a handler how to intercept without force or being negative such as yelling or hitting which only makes the situation worse. I hope this owner dod not loose their standard poodle they are wonderful breed of dog and re not deserving of harsh treatment I hope the owner on both sides have come to a truths and have learned valuable lesson on understanding dogs that is our gift to our best friend we could ever give!!