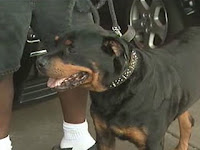 He's all, "Enough with the Toto thing, already."

And check this out: another dog named Chance survived a tornado in Iowa. [If only the human victims could have been as lucky as these pups!] Here's the Rottie's story [check the link for a video]:

RICHTON PARK, Ill. (CBS) ― Chase certainly doesn't look like Toto from "The Wizard of Oz." He's a big rottweiler, not a little cairn terrier. But he certainly does a wonderful impression.

On Saturday, when a tornado swept through Richton Park, Illinois, Chase was hanging out the backyard of Sandra Holmes' house. That is, until the tornado picked him up and took him on the ride of his life.

"People started coming up and saying 'we saw your dog in flight,'" said Holmes, Chase's owner.

"The dog was in the air, he was going around like he was pulled out of the ground," Smith said.

Luckily, Chase didn't get whisked away to the magical land of Oz. Instead, residents found him more than a block away in the woods, dazed and shocked, but alive.

Yeah I have read this story and it was really a heart warming and encouraging story...tough dog..