"Whoever saves a life, it is considered as if he saved an entire world" 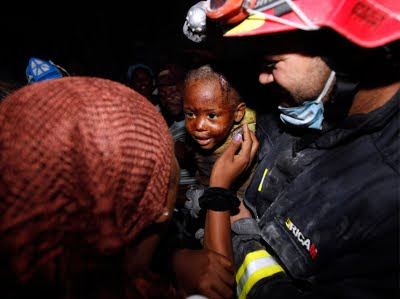 Rescued from a collapsed building in Port-au-Prince, two-year-old Redjeson Hausteen Claude is reunited with his mother. The firefighter/rescuer is a member of the Community of Madrid's Emergency and Immediate Response Team, ERICAM. Photo by Gerald Herbert: see the full size version here, at the Big Picture.
It's incredibly moving to me that this can happen: that in the wake of a disaster, members of rescue teams from around the world set aside their day-to-day concerns, leave their homes, rush to the devastated area and go to work saving lives and helping others.

While the rescue teams are hard at work, the rest of us can make some small efforts of our own to diminish the horror, the grief and the suffering in Haiti. My homeboy James Fallows suggests a donation to Food for the Poor, and of course the Red Cross, Doctors Without Borders and Yéle Haiti are good organizations if you're still looking to donate. Texting a donation will set you back a relatively painless five bucks if you follow the directions at Yéle Haiti, ten via the Red Cross link above.

Looking for updates on conditions in Haiti? Boing Boing has a great compilation.


And the search dogs...! Lots of links and photos from Nag on the Lake, Discovery News, Dog Art Today, Unleashed and a selection of news outlets. Here's an update from the Search Dog Foundation:

Bill Monahan and his Border Collie, Hunter, were searching a neighborhood near the Presidential Palace, concentrating on a large bowl-shaped area of rubble which was all that remained of a 4-story building.

After criss-crossing the area, Hunter pin-pointed the survivors’ scent under 4 feet of broken concrete and did his “bark alert” to let Bill know where the victims were. Bill spoke with the survivors, then passed them bottles of water tied to the end of a stick. As they reached for the water one of the girls said, “Thank you.” Highly trained rescue crews from California Task Force 2 are now working to extricate the girls from the wreckage and provide first aid.

Bill and Hunter continue to search, as do the 6 other SDF teams on the ground in Haiti:

Also at work in Haiti are handlers and their dogs from France: 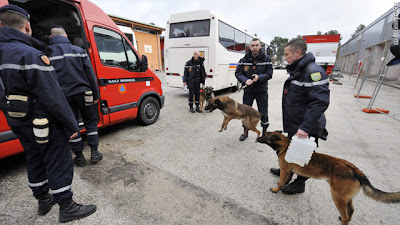 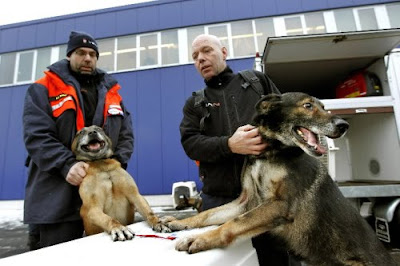 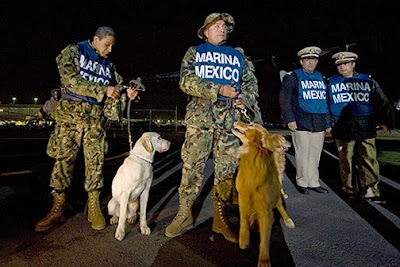 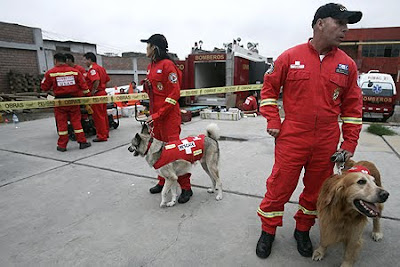 and Taiwan, among other countries: 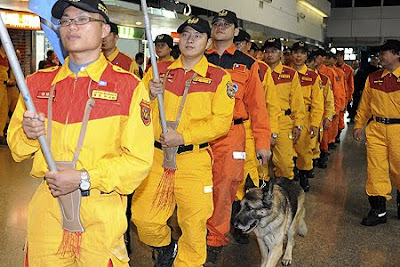 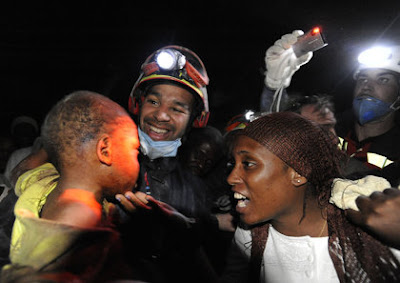 The photo is by Carol Guzy of the Washington Post. If Carol's name looks familiar to dog people, it's probably because of her brilliant photos of the Vick dogs. And if you were to ask Carol or the Spanish fireman, "Why are you in Haiti now?" each one might say to you, in his or her own language and in his or her own way, I came to Haiti because that's my blood down there.
Posted by Luisa at 9:15 PM