"Living on nothing but food stamps" — with dogs [and Western values]

Two images by Stephen Crowley for the NY Times photo essay, Living on Food Stamps. See related article here. Quotes below are from the photo essay: 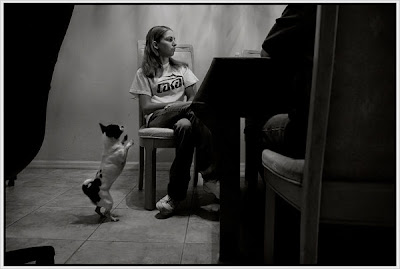 Diane Marshall, 27, lives with her brother Kevin Zirulo. "We've got all kinds of [discarded furniture they have scavanged] on Craigslist we're trying to sell," she said. But she said that it fluctuates, "One day you have a bunch of sales and you get by, and the next it's you're calling mom and saying, 'hey, I need toilet paper.'" Mr. Zirulo added that Marshall just posted on Craigslist that she has a female Chihauhua that she wants to get pregnant. "I don't know if this little dog is able to pop out that many puppies, but if we had an extra puppy or two we'd be happy to sell them." 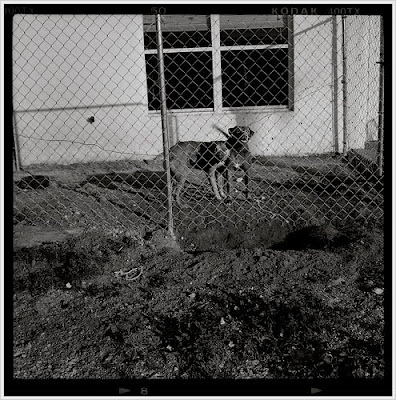 [Isabel] Bermudez worries about crime now that she lives in a rental apartment. She keeps dogs for protection.

On the one hand, I have some opinions about these photos; on the other hand, I've never been broke, jobless and hungry.

[For one thing, I'd be inclined to offer to pay for the Chihuahua to be spayed. Risk of complications if the dog gets pregnant; small pups are a dime a dozen — you'll wind up giving them away in front of WalMart, etc. Let me pay for the spay.]

I saw the NY Times photos after reading this passage by author Mary Elizabeth Thurston on the Bad Rap blog:

"Pet keeping is now one of the Western values being exported to cultures where animals have traditionally been viewed as consumable resources. With only the affluent in these countries able to afford keeping dogs for pleasure, pets again are becoming emblems of prestige, just as they were in nineteenth-century Europe. So we might ask, as the far reaches of the globe are transformed by a second wave of industrialization, whether the human-dog relationship in these developing nations will follow the same evolutionary pattern. Will the camera again document a canine pilgrimage from slave to soulmate as these societies grapple with concepts of self-determination and a compassionate ethic that embraces us all?"

What would the rest of humanity do without our Western values, I wonder. Here in the developed world our dogs are soulmates, not slaves. So I turn from news about guard dogs and puppy mills and the latest U.S. dogfight busts and 100 Huskies in Quebec rescued from neglect to a guest post from Catherine in Bangladesh, posted on the terrific blog One Bark at a Time. Excerpt:

The Bangladeshis are starvation poor, but many share what little they have with the dogs and cats on the street. It might take six bearers, sharing lunches, digging in garbage, and pooling their tea money, to feed one crippled old dog, but the miracle is that those six do share.

There are no animal welfare groups here dealing with dogs and cats: the few concerned people are fighting the illegal poaching of endangered species, and the traffic in exotic pets. They are not doing well, because although there are laws against these things, no one can enforce them. If folk ask about helping, they should give their donations to proven development groups who are working to improve things for the people here. The people will share: it's what they do.

If you'd like to lend a hand, here is a long list of international aid and development groups to check out: Get Involved - Half the Sky.
Posted by Luisa at 7:48 PM