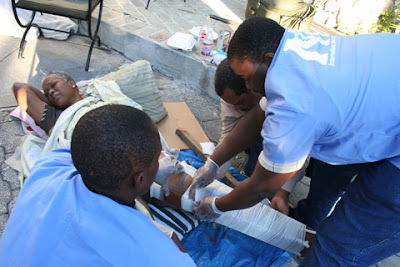 The IMC is hard at work in Port-au-Prince.
International Medical Corps, one of the best emergency medical teams on the planet, is on the ground in Haiti and working at a hospital in Port-au-Prince. From their web site:

We believe there are 1,500 patients seeking treatment and approximately 70%-80% need surgery. So far there have been 70 amputations and another 150+ are needed.

IMC is also working out of their hotel, Villa Creole, "which has been turned into a makeshift clinic," according to their web site. Here's the IMC home page. I could just slap myself for not mentioning them earlier. Here's their page with info on Haiti -- you can donate $10 by texting.

Yéle Haiti has come under recent scrutiny, but IMC's track record is impressive, and impeccable.

Also: Mensch of the Month award to Dr. Sanjay Gupta, who stood fast all night at a field hospital when other medical personnel were ordered to leave.

CNN posted video from Friday night that shows the Belgian team packing up its supplies and leaving with a U.N. peacekeeper escort in marked trucks.

Gupta stayed behind, and along with CNN staffers, security personnel and at least one Haitian nurse who refused to leave, took care of 25 patients as best they could, given the lack of medical supplies.

"I've never been in a situation like this. This is quite ridiculous," Gupta says on camera.

I am so not going to snark at the Belgian emergency response team. Things are beyond chaotic in Haiti right now, and Belgian responders have been saving people right and left. I will, however give a round of applause to Dr. Gupta and his people. [stands, applauds, runs off to donate to IMC]
Posted by Luisa at 1:11 PM